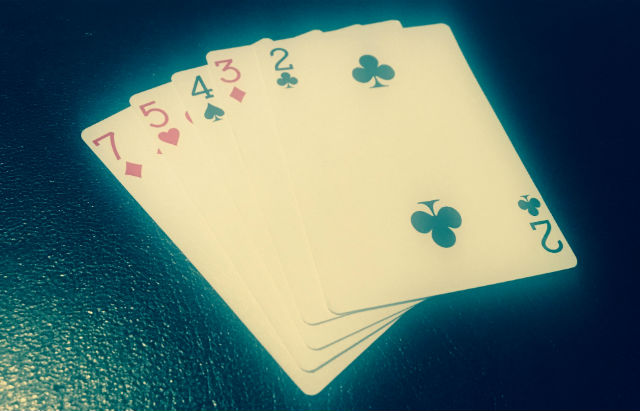 One of the more popular variants of poker outside of No Limit Hold’em and Pot Limit Omaha is 2-7 Triple Draw (often referred to simply as “Deuce”). The game has been played for decades and in recent years a lot of the highest-stakes action online has been played in Deuce. The novelty of drawing cards, fast action and the possibility to make creative plays continues to make the game attractive for long time pros and inquisitive newcomers alike.

At the 2017 World Series of Poker, Limit 2-7 Triple Draw will again have two standalone events ($10,000 and $1500) as well as featuring in many mixed events ($1500 up to $50000). For the first time, Pot Limit 2-7 Triple Draw will also be a part of the Dealers Choice events and will also feature in the Big Bet Mix event. Limit Deuce already plays as one of the biggest games in mixed tournaments, the addition of its Pot Limit big brother will make having a knowledge of 2-7 fundamentals especially important for those looking to try their hand in a mixed event this summer. A lot of the information here is relevant for Deuce’s family members, No Limit 2-7 Single Draw and Fixed Limit A-5 Triple Draw.

Predominantly Hold’em players will likely find Deuce one of the easiest mixed variants to learn, especially if they have any limit background. Whilst the hand ranking system is completely different (the opposite of Hold’em in fact), there are four streets of betting like in Hold’em. Whilst it may irk some old school live players, those who learned the game online often refer to the streets as Pre (betting round before the draw), Flop (after the first draw), Turn (after the second) and River (after the third and final).

Each player is dealt five cards and will have three opportunities to discard between 0 (standing pat) and five cards. The “lowest” hand wins, counted from the highest card downwards. Straights and flushes stand effectively no chance to win at showdown. 7-5-4-3-2 is the nuts in this game and a royal flush is the worst possible hand. Aces are always high, meaning that A-5-4-3-2 is not a straight, it is, in fact, the best Ace low.

In general, the aim when drawing should be to make a strong low. Seven lows are extremely strong hands that can be value bet for multiple bets in most situations. There are four of these. “Eighty-six” (hands that being with 8-6) hands and the one Eighty-five (or eight perfect) are usually safe to draw to, providing we also have a deuce in our hand. There are five of these. Eighty-seven hands can either be a sigh hero call or a slam-dunk value bet depending on the situation. Only with experience can one really get a feel for how thin to value bet or be able to make a prudent fold with an Eighty-seven that can’t win. There are nine of these hands, making a total of 18 Eight or Seven lows. Additionally, there are thirty-four Nine lows, though in most situations it is wise to throw our nines away pre-draw.

As is the case in all games, starting hand selection is absolutely crucial. “Don’t leave home without a deuce” is a phrase I heard early on in my Deuce education and for most situations, it’s tremendously important to start with a deuce. Without a deuce, the best hand we can make is 8-6-5-4-3 (the ninth best hand). Sure, a two-card draw (meaning we will be discarding two cards, in this case, 9+ and pairs) like 8-6-5 can catch a deuce along the way but remember that your opponents often won’t be leaving home without a deuce either, making it extra hard to make a premium hand.

With this in mind, “draw from the bottom up” would be my next fundamental piece of advice. Whilst 4-3-2 and 7-5-4 are both 60% of a wheel and in theory, would have the same chance of making one if we just pulled random cards off of the top of the deck, 4-3-2 will make much “smoother” hands. Being able to make the premium eights as well as the sevens is what makes 4-3-2 a snap-open from everywhere and 7-5-4 a snap-fold from early position. Starting with a deuce and two other wheel cards (a wheel in 2-7 is 7-5-4-3-2) is a great starting hand. The lower the better, but having a seven with our deuce and additional wheel card is also very strong.

7-3-2 is approximately equal to 4-3-2. Amusingly, I heard someone at the WSOP passionately describe how 7-3-2 was the bread of the game and the cards needed to fill his hand (4, 5, 6) were the fillings, in a debate about which hand was better. Functionally it makes little difference to one’s strategy but my personal preference would be 4-3-2 if multiway or out of position and 7-3-2 if not the case.

Straight draws should try to be avoided where possible, especially open-enders. Flush draws are also severely defective and will often make an otherwise playable hand a fold. 5-4-3-2 and 6-4-3-2 are still very playable hands, capable of making premiums.

Sticking mainly to one-card draws and premium two-card draws for pre-draw hand selection will be a solid strategy for those learning the game, though adding 3-2 and maybe a few other three-card draws to a button steal range and big blind defend range should be profitable.

A lot of the time in Deuce, the betting will be straightforward. Checking dark and betting dark are very common when one player is drawing less cards. Always checking when a card or more behind is usually correct (I would bother to check my cards before checking when drawing three and my opponent two), as is betting when we are taking less cards, especially in position.

Raising when making a pat hand against a draw is essential. This gets value by charging our opponent to draw and from chasing out others still drawing if in a muli-way pot. If we have a made 8 low or better, we will usually be standing pat and the later on in a hand that we make a 9 low, the more consideration we can give to patting it. A Ten low and even a Jack low are a favorite against someone still drawing one, so on the final draw we can consider patting these hands, especially in position.

The rougher the draw, the more consideration we should give to patting if we have a drawing dilemma. J-7-5-3-2 is a favorite against someone drawing one (let’s assume to a smooth 8) but we will often make more money by breaking, giving us a chance to super-cooler our opponent for multiple bets and make the wheel. A hand like J-7-5-4-3 may look almost identical and whilst it can still make the wheel, the fact that a 6 gives us a straight would make our opponent’s 8 draw a favorite, so here we would be better off standing pat.

The river is a very important and often complicated street in all games. Using solid poker fundamentals of checking mediocre hands combined with picking the better hands to value bet and the worst hands to bluff should make for a good river strategy. If both players are drawing one card on the final draw, check-calling with rough Nines through to Jacks is a very rough guideline, mixing in some check-raises with our 7s and check-folding our Queen lows and up and most pairs. For our bets, we should lead our better nines and better and for bluffs, betting when he hit our top pair or a straight should make us somewhat balanced when out of position. In position is a lot easier, meaning we can value bet with thinner hands and bluff a little wider.

Attempting to cover all of the scenarios in 2-7 Triple Draw would push me even further above my suggested word count than I already am, so I have tried to cover the most common scenarios as well has some thoughts for pre-flop hand selection and some simple but powerful concepts that should send even a beginner on their way to holding their own. Deuce is a game of thin margins and only through experience can one get a strong grasp of what to do in the borderline situations.