As 2019 draws to a close, PocketFives takes a look back at the year that was in poker news, going month-by-month through the biggest and most important stories of the year. Even though it was August, the WSOP Main Event was back in the headlines, as a player that was disqualified from the tournament had a terrorism charge brought against him and another player was being sued over a staking deal.

Ken Strauss, who was disqualified from the 2019 World Series of Poker Main Event, was taking into custody and charged with making terroristic threats against a Las Vegas casino. The charge stemmed from Strauss’ social media activity at the end of July. In a tweet, Strauss threatened the Venetian Resort. 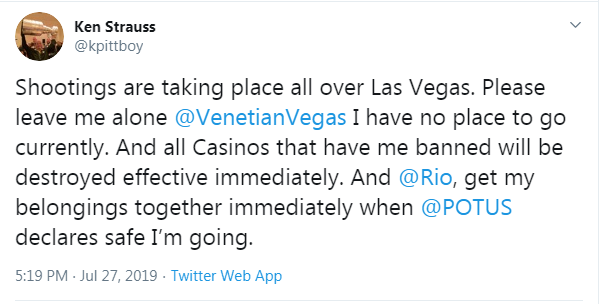 Another big story from August that had WSOP Main Event ties was a lawsuit involving seventh-place finisher Nick Marchington. The 21-year-old Marchington won $1.525 million for his result, but he was soon hit with a lawsuit from two men who claimed to have bought a 10% piece of his WSOP Main Event action.

David Yee and Colin Hartley, partners in C Biscuit Poker Staking, alleged that Marchington attempted to back out of a staking deal after he had agreed to sell 10% of his action to them for the WSOP’s $5,000 Six Max No Limit Hold’em and Main Event tournaments.

There were many questions surrounding the situation, most of which focused on the conversations had between the two parties and if the deal was on or off.

With a buy-in of £1.05 million, the Triton Million: A Helping Hand for Charity became poker’s richest tournament. It was also set to award some absolutely mammoth paydays. Topping the field of 54 entries was Aaron Zang, who won £13.779 million. But, Zang wasn’t the event’s biggest winner.

A heads-up deal between Zang and Bryn Kenney saw Kenney take home £16.89 million. The conversion rate put the score north of $20.4 million for Kenney, making him the holder of poker’s largest single score from a live tournament.

*First and second prizes as a result of a heads-up deal.

For more on this incredible tournament, go back and read the PocketFives recap.

Bryn Kenney Doing His Own Thing and Crushing

Speaking of Bryn Kenney, PocketFives’ Lance Bradley had the opportunity to sit down with Kenney for an interview. Even though he’s younger, Kenney isn’t often thought of as the same wizard-like player that his peers are. Kenney would be the first to admit it, too, but with a style all to his own he put together a tremendous year of poker in 2019.

Checking in on Kenney’s stats on Hendon Mob, we can see that Kenney has more than $56 million in live tournament earnings and is atop poker’s all-time money list. As we mentioned before, he’s also the holder of poker’s largest single score from a live tournament. In 2019, Kenney won more than $30 million.

Take some time and read the special feature story on this special player.

PSPC Going To Barcelona in 2020

The first-ever PokerStars Players Championship was a smashing success, becoming the largest $25,000 buy-in event in poker history. PokerStars wanted to run it back, only in a different location, and announced that the PSPC would be heading to Barcelona, Spain.

Taking place August 20-24, the 2020 PSPC will be part of the European Poker Tour stop in Barcelona that is ever so popular with players. Platinum Passes are back and currently being given out through a variety of promotions from PokerStars, and this event is anticipated to be even larger than the first.

‘Girafganger7,’ a former top-ranked online poker player in the world, earned his second PocketFives Monthly PLB title by topping the leaderboard in August. He put in a ton of volume and accumulated 2,399 points from more than 120 results. He won just over $125,000 from those results. His August was highlighted by a win in the PokerStars High Roller Club: $530 Bounty Builder HR for $13,519.