After getting into the New Jersey online gaming scene full bore, 888 Holdings has been taking a little longer to join in with the Nevada industry. According to the Chief Executive Officer of 888, that should be changing within the next six months.

According to Brian Mattingley in an interview with Bluff.com, 888 Holdings will introduce an 888 Poker-branded room either in the final quarter of 2014 or within the first three months of 2015.

Part of the reason for the delay is in the fact that 888 is looking to take full advantage of agreements for online poker liquidity between Nevada and Delaware, which is expected by the end of this year. As 888 handles the three online poker options in Delaware, they do not have (as yet) any offerings in the state of Nevada (888 is only the software provider for WSOP.com); once the interstate network between the two states kicks into effect, 888 would want to be on the scene in the Silver State to take advantage of such interstate possibilities.

This has long been one of the issues with the Nevada online poker industry and, to a further extent, that in Delaware. According to PokerScout.com, the three rooms that are offered in Nevada – WSOP.com, Ultimate Poker and the most recent newcomer, Real Gaming – combined have only a seven-day average of around 160 players, with peak levels of the two top rooms (WSOP and Ultimate) over the past 24 hours barely eking over the 150 player mark.

While the numbers in Delaware have been less than stellar (Delaware Poker, the highest ranked First State online room, peaked at 26 players over the past day), the interstate compact could drive traffic to both states’ operations due to an increase in player availability. 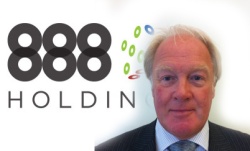 In the same discussion with Bluff, Mattingley (pictured) is optimistic that there will be a further interstate agreement with what is the “big prize” to this point, New Jersey. Last week, an agreement was signed that links progressive slot machines between the Garden State and Nevada. When it comes to online poker, however, the two states have yet to come to any arrangement. If something along these lines were to come to fruition, it would tremendously increase 888’s hold on both marketplaces.

Currently the largest U. S. regulated online poker room is that of PartyPoker/Borgata Pokerin New Jersey, peaking at 374 players over the last 24 hours. WSOP.com New Jersey (powered by 888), however, is right behind them with a peak of 315 players (both have seven-day averages of 130 players). Adding these players into an interstate market with both Nevada and Delaware would potentially bring the peak numbers over the 500 player mark (such rooms as the Winning Poker Network, SkyPoker, the Ongame Network and 888 Poker Spain have numbers similar to this), create average player counts in the 200-250 player area and create viable player pools for cash games and tournaments to maximize U. S. regulated online poker’s potential.

These numbers are without the potential in 2015 for other players to potentially get in the game. Although California has tabled any discussion regarding online poker until its next legislative session, many in the online gaming industry believe that the Golden State will be the next (and by far the largest) domino to fall come 2015. Other potentially lucrative states such as New York, Illinois, Pennsylvania and others will also have to debate the issue and, if these states joined forces with the triumvirate that currently are operating, truly regulated interstate online poker would return to the United States.

This also doesn’t count the potential addition of PokerStars to the New Jersey scene, rumored to be around the end of September. It is a poorly-kept secret that players are clamoring for a return of the international leader in online poker and, if they were to come into play in New Jersey, PokerStars’ impact would be seismic overall. The PokerStars saga might not have a happy ending, however, as they still face “bad actor” clauses in other regulated states and those that hope to introduce legislation on the industry.

With the potential for 888 to join in full-force on the Nevada gaming scene, it should be an interesting remainder of 2014 for online poker in the U. S.