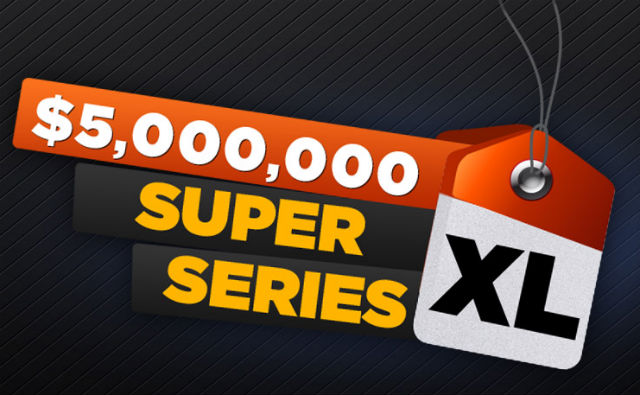 ‘trojanmouse’ won the Champion of Champions freeroll to win the package worth $12,500. Over the course of the 63-event series and the $5 million in guaranteed prizepool, the top 18 players on the Super XL Series leaderboard qualified into the series-ending freeroll.

runout, the pocket kings held up and ‘trojanmouse’ rode an early chip lead all the way to a victory.

The series came to an official last Sunday with the $1,050 Main Event. There was a massive 1,096-player field and 344 re-entries to bring the official field size to 1,440 entries.

Gonzalez displayed why he is the top ranked online player on PocketFives, finishing 17th for $8,250. He came up just shy of his fourth final table of the series.

When the final table was reached, it was ‘Enigmasility’ who stole the show. The player from Belarus dominated the final table and quickly amassed a huge chip lead. He had about an eight-to-one chip lead heads-up against ‘GoMore21’ before his

WSOPE Bracelet winner Adrian ‘ADRI_ATM’ Mateos came in ninth in the Main Event, earning $17,250 for his final table appearance. But that wasn’t his only final table of the series. Just a week earlier, Mateos took down the $150,000 guaranteed Super XL Mega Deep event. There were 959 entries in the $215 No Limit Hold’em event. Mateos came out on top to earn $35,524.

Earlier in the series, 888poker Ambassador Chris ‘Moorman1’ Moorman added another title to one of the most successful online poker resumes in history. Moorman bested the 667-entry field in Event 38, a $55 buy-in No Limit Hold’em event with rebuys and add-ons. Moorman earned $16,453 for his first Super XL title of his career.

Amidst all of the other highlights of the Super XL Series, Jon ‘apestyles’ Van Fleet took down the biggest buy-in of the series. Van Fleet bested a field of 204 players in the $2,100 No Limit Hold’em High Roller event for $87,290.

Van Fleet’s road to the title was not an easy one. This was one of Gonzalez’s three final tables and the top ranked player in the world stood between Van Fleet and the title. Van Fleet started with a three-to-one chip lead over Gonzalez, but after some time, the stacks evened out.

to send the pot to Van Fleet and send Gonzalez home with $62,930 for his second place finish.