For the thousands that have tuned in to the Polk-Negreanu high-stakes, heads-up challenge the early going has delivered when it comes to providing action. SIx-figure swings, in both directions, have allowed both Negreanu and Polk to hold the lead at one point or another with some of the biggest pots thus far taking place when both players clash by shoving all-in.

While the daily total of gains and losses will tell the tale of who is winning and losing in the moment, something that’s tougher to measure is how each player is running. Players can debate how they think Negreanu or Polk is playing, but when it comes to All-In EV, the numbers don’t lie. That’s one of the reasons that one-time poker pro Luka Kovač started to keep track of that very stat for the match.

“I’m watching the match, because it’s one of the biggest duels that we as poker fans will get, and so for me, it was kinda a no-brainer,” Kovač said discussing why he started following so close. “I had a feeling that Daniel isn’t running that well in all-in spot and when he lost that flopped two pair hand with Q5 against Doug’s aces, I had to figure out what the actual [All-In EV] number was.”

The hand in question took place in session number six. Negreanu raised on the button with

and Polk put in a three-bet with

which Negreanu called. The

flop gave Negreanu two pair while Polk held his overpair. With effective stacks at $36K, Polk put out a roughly $6K bet which brought on a shove from Negreanu which Polk snap-called. The turn was the

keeping Negreanu in the lead. But when the

hit the river, Negreanu’s two pair was counterfeited and Polk dragged the over $80,000 pot. At the time the pair got all the money in the middle, Negreanu was more than 72% to win the hand.

“I started re-watching the old session and I knew there weren’t many all-in hands,” he said. “Surely enough [Negreanu] was down a lot at that point, more than $240K. Since then I’ve been updating it live during the matches, so it wasn’t a big deal. Later, I decided to make it a bit more presentable and post it for others to enjoy. Daniel was actually up $179K at that point while being down $160K in all-in EV, so I knew it would kinda blow up as ‘nobody’ expected him to do this well.”

Kovač is used to looking at these kinds of stats. A former PokerStars Team Online pro known by his online screen name ‘Corey Steel’, Kovač played online poker professionally for nearly 10 years until PokerStars was forced out of the Slovenian market. Since that time, he’s continued to stay involved in poker as well as freelancing for the online site PokerPro, the site he originally posted the data to. But as a one-time pro poker player, Kovač admits that the data, while incredibly interesting, in no way tells the whole story of who is playing well during the match. 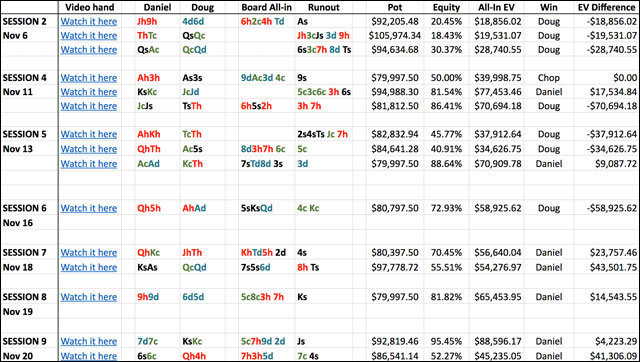 “This is purely for entertainment purposes,” he said. “All-in EV doesn’t tell us much, it’s just one piece of the puzzle. Daniel has definitely been lucky in some other spots which don’t reflect on his [All-In EV] number at all.”

At the time of this writing, there have been 11 sessions, 4651 hands and the pair have only gotten all the money in the middle 15 times before the river card hit. Over that time, Negreanu finds himself running -$115,332 in All-In EV which makes up for some portion of the $143,996 lead (or just 3.5 buy-ins) Polk currently has.

For the most part, the chart shows us that when the pair get their money in the middle, the stronger hand has held. The two large exceptions are the above hand and an earlier one when Negreanu got his

board for a pot worth nearly $82,000. The turn and river brought Polk a backdoor heart flush and Negreanu 86.41% pot equity went into Polk’s stack.

If this sounds like it’s biased for Negreanu, one might think it was because Kovač and Negreanu were on Team PokerStars at the same time. But Kovač insists keeping tabs on All-In EV from Negreanu’s POV has nothing to do with that.

“I was mostly watching GGPoker’s stream on YouTube and was trying to figure out how much Daniel was down, so it’s just out of convenience. I don’t really have a favorite,” Kovač said. “But I’m usually rooting for underdogs, so I guess that would be Daniel in this case. Also if Doug actually loses, I think it might spur some more poker drama and I’m always down for that. ‘I’m just here for the memes.’”

To keep tabs on the running total of the Polk-Negreanu All-In EV, check out the original document.