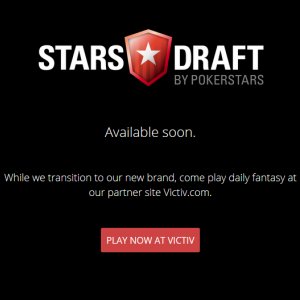 In breaking news, Amaya, the parent company of PokerStarsand Full Tilt, made good on its promise to enter the daily fantasy sports world before football season started by acquiring Victiv. The site will be renamed StarsDraftand, according to a press release, will be “initially launched at StarsDraft.com in select US markets and later through the PokerStars platform.” Sign up for Victiv here!

Matthew Primeaux, CEO of Victiv, said in the same release, “StarsDraft will combine Victiv’s innovative platform and experienced DFS team with Amaya’s expansive consumer base and operational excellence as the world’s preeminent online gaming brand. We intend to capitalize on what we believe is strong crossover between online poker players and daily fantasy sports. PokerStars is the most trusted brand in online gaming and brings unmatched security, customer support, and technical infrastructure that we believe all players can rely on.”

According to Legal Sports Report, Victiv currently takes players from each state besides Arizona, Iowa, Louisiana, Montana, and Washington. The site added, “Victiv is a second-tier site behind the DFS duopoly of FanDueland DraftKings, making the cost of acquiring Victiv much more reasonable than taking over either of the top two sites, which now have billion-dollar valuations.” 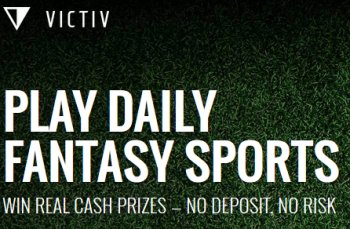 Victiv, which launched last September and so is not even a year old, is based in Austin, Texas and its current management team will continue to steer the ship. The first game of the 2015 NFL preseason was four days ago and the first game of the regular season is on September 10, so the window for Amaya to enter the market prior to Week 1 was closing quickly.

PokerStars was recently seen surveying former players about DFS and this author had heard it was building its own DFS product and so might not be ready for football season. According to LSR, however, “Other than integration with the PokerStars client, that is off the table now.”

DraftKings and FanDuel have been busy partnering with some of the largest sports-related companies around. In fact, DraftKings was a presenting sponsor of the World Series of Poker. FanDuel and DraftKings have partnerships with many MLB, NBA, and NFL teams, just to name a few.

Yahoorecently launched its own DFS product, as did CBS, which calls its site SportsLine. Despite all of the recent launches and acquisitions, FanDuel and DraftKings remain the frontrunners and largest sites in the industry.