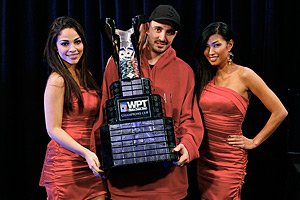 American poker player Anthony “Boston Tony” Ruberto entered Day 6 of the 2014 World Series of Poker Main Event with over 5.2 million chips, which was good enough for eighth place with 79 players remaining. He finished the tournament in 68th place for $103,000.

While this was Ruberto’s first deep run in the World Series of Poker Main Event, he has had some success playing live tournaments, most notably winning the $3,500 WPT Jacksonville Main Event for $326,000 in late 2011.

Ruberto found himself chipping up throughout Day 5. Early in the day with the blinds at 10,000/20,000, Ruberto called an all-in against Denmark’s Rasmus Larsen. Larsen held Kc-Td against Ruberto’s Ac-5c. Larsen was sent to the rails when neither player improved on a 9s-7s-7c-4c-8d board.

Later in the day Ruberto was battling it out with Canada’s Griffin Flush_Entity Benger who earlier in 2014 was ranked #1 on PocketFives. The action got interesting on the turn on a 8s-9c-4c-Kc board with Benger holding Jh-Tc against Ruberto’s As-Qc. Benger started the action betting almost 200,000 in chips which Ruberto raised to 400,000 with just ace high and a queen high flush draw. Benger thought about his options with a decent straight and flush drawing hand and reraised the action to 900,000 chips which Ruberto called. Both players checked the river when the 4h improved neither players’ hands. Ruberto’s risking turn play shipped him a 2 million chip pot and surged his chip stack to almost 4.1 million in chips.

Soon after his hand with Benger, Ruberto won a smaller pot when he moved all in with Jc-Tc on a 7d-Ks-Ts-Td-5h board against fellow American Tom Midena. Midena took a few minutes to deciding what to do before calling off his tournament life with 6s-6c. While Midena was sent packing, Ruberto saw his chip stack grow to almost 4.6 million in chips.