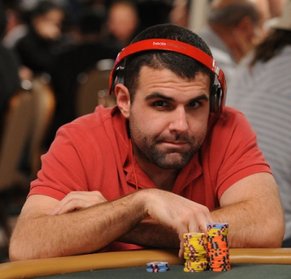 Over the weekend, poker author and longtime PocketFiver Jon apestylesVan Fleet (pictured) finished third in the PokerStars Sunday Millionfor $89,000. The cash was huge for a number of reasons. Not only was it his sixth largest online poker score ever, but it also put him over $7 million for his career.

The Sunday Million had 5,425 entrants this week, which meant a prize pool of a little over a million dollars was up for grabs. There wasn’t a chop and, consequently, Van Fleet had the largest cash of anyone on PocketFives this weekend.

This was his largest five-figure cash ever. However, Van Fleet has turned in five scores of over $100,000 over the years. Here’s a look at how he’s wrecked the competition: 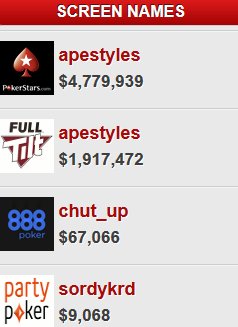 Van Fleet has been a member of PocketFives since September 2005 and currently plays online poker from Canada, where he’s the top-ranked member. Worldwide, the $7 million man is #33 in the PocketFives Poker Rankings and reached an all-time high of #3 in 2007.

In a thread on PocketFives, players congratulated Van Fleet on his Sunday Million final table, including one person who wrote, “Confirmed the best ever. You don’t need to win to be the best.” Alex Assassinato Fitzgerald added, “Apestyles = Greatest online of all-time. I’m calling it now.”

Van Fleet tore up PocketFives in 2007. As mentioned already, he reached #3 worldwide on our site that year. He also won the August 2007 Monthly PLBrace and scored two PocketFives Triple Crowns that month for almost 1,200 points combined.

He plays as apestyles on PokerStars and Full Tilt. On 888 Poker, you can find him under the user name chut_up. He’s now $500,000 away from becoming only the 10th PocketFiver ever to hit $7.5 million in online scores.