It was a super-sized week for the GGPoker Super MILLION$ in which Russian superstar and current #7-ranked online player in the world, Arsenii ‘hellohellohello’ Malinov took home the Super MILLION$ Week Super High Roller title and this week’s massive $661,743 first-place prize.

With it being the 2021 Super MILLION$ Week on GGPoker, what was normally a $10,000 buy-in for the regularly scheduled weekly high roller was bumped up to $25,500 creating a prize pool of more than $2.8 million. By Tuesday, the field of 114 runners was paired down to the final nine and, as can be counted on for this event, included many of today’s top tier online players.

Joining Malinov at the final table were Americans Jason Koon, David Coleman, and Seth Davies, who entered the final table as the chip leader. Matthias Eibinger started the final table second in chips and not too far down the leaderboard was online poker savants Aleksejs ‘DamageAP’ Ponakovs from Latvia and Joao ‘Naza114’ Vieira.

Daniel Dvoress also made the final day, but as the short stack with fewer than 10 big blinds was under pressure right away. Under the gun, Dvoress pushed his remaining chips in the middle holding

and was quickly called by Malinov who had

. The flop came out

, keeping Dvoress out in front. The

hit the turn, giving Malinov flush outs to go with his overcards. The

completed the flush for the Russian and Dvoress hit the rail in ninth place for $74,821.

It wasn’t long before David Coleman also found himself at risk. The New Jersey native moved all-in from late position with the

. Joao Vieira re-shoved on the button with a dominating

. Vieira’s paired kicker gave him the pot and Coleman exited in eighth place for $98,256.

Less than twenty minutes later another American was making his last stand. After an open from Eibinger in the cutoff, Malinov three-bet his

in the small blind. Jason Koon moved all-in for less with the

. Eibinger got out of the way and the flop fell

giving Malinov bottom pair. The pair of fives held through the

. From the small blind Eibinger shipped his nearly 25 big blind stack with

and was quickly called by ‘REPTAR’ who had Eibinger covered. The flop came

was of no help and neither was the

river. Eibinger, who started the day second in chips, settled for a sixth-place finish for $169,444.

Minutes later, Vieira was all-in after jamming his

on the button. In the big blind ‘REPTAR’ made the quick call with the

. Both players paired their ace on the

flop. But kickers played after the

river and awarded a second knockout to ‘REPTAR’ and eliminated Vieira in fifth place for $222,514.

Nearly 45 minutes passed as the final four players took turns shipping chips back and forth. Eventually, Ponakovs opened with the

and was called by both Davis in the small blind and Malinov in the big blind. The

flop was checked through to Ponakovs who put out a small bet. Davies called but then Malinov moved all-in holding

for top pair and a gutshot straight draw. Ponakovs decided to put the rest of his chips in the middle and Davis folded. The turn was the

giving Ponakovs a pair and some additional outs. While the

river gave Ponakovs a straight, it gave Malinov a higher one and sent Ponakovs out in fourth place for $292,207.

With three left, a pair of big hands clashed when ‘REPTAR’ open-shoved his final ten big blinds from the small blind with

into Seth Davies who held

in the big blind. Davies, with the larger stack, made the quick call and watched as his pocket kings held through the

runout. ‘REPTAR’, who stared the day in eighth place, laddered to third and collected $383,728, by far their largest score on GGPoker.

Malinov started heads-up play with a slight chip lead over Davies, but over the course of a few hands, he extended that to a nearly four-to-one advantage. On the final hand, Davies limped the button with

. Malinov put in a raise with the

Malinov picked up the victory and $661,743 in this fourth final table appearance. His new total earnings in the GGPoker Super MILLION$ tops $1.3 million, sending him into the Top 10 on the tournament’s All-Time Money List leaderboard. 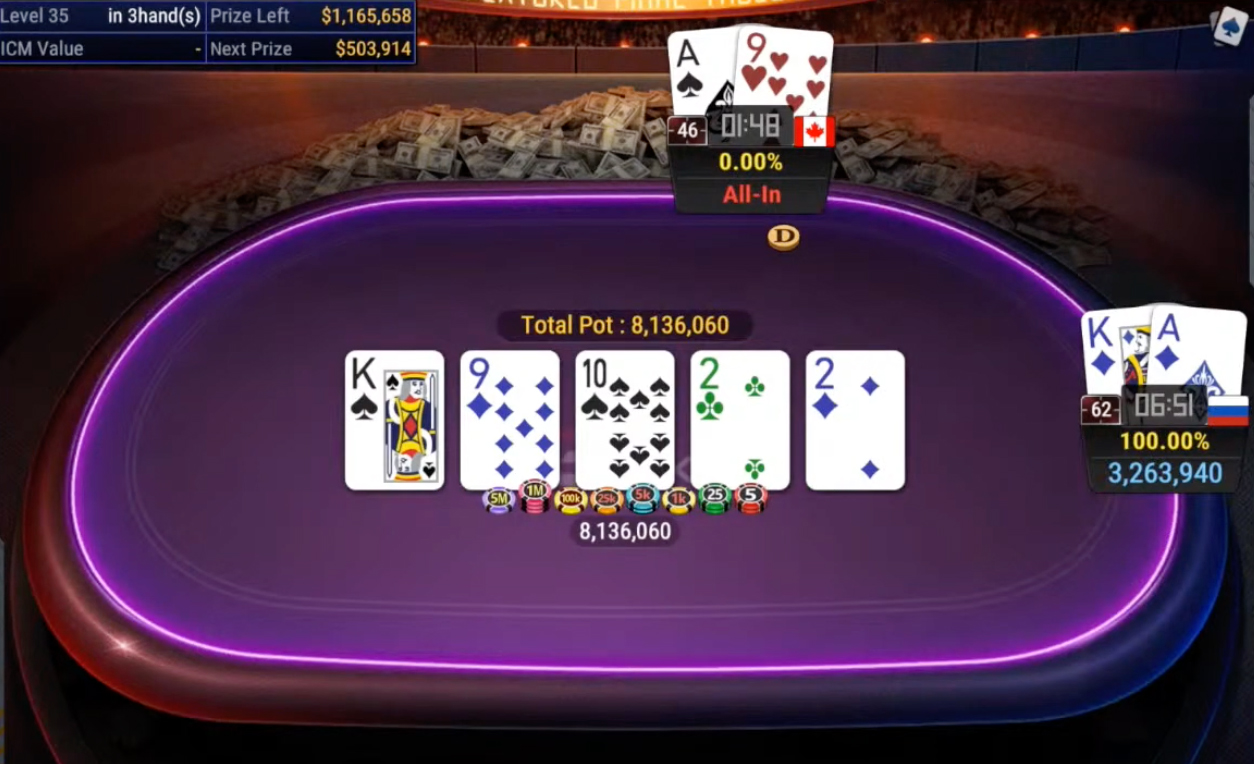