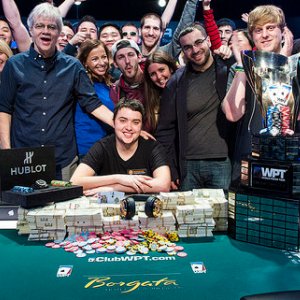 There were 239 entrants in this year’s WPT Championship and the six-handed final table featured a gauntlet of talent that included WPT host Tony Bond18Dunst and former WPT Championship and World Series of Poker Main Event winner Carlos Mortensen. Dunst hit the deck in sixth place after Mortensen sucked out on kings with tens. That hand crippled Dunst, who was eliminated shortly thereafter.

If you missed it, Dunst recently sat down with PocketFives and talked a little daily fantasy sports.

Mortensen exited in fourth place after his pocket tens weren’t so fortunate against A-6. Mortensen is up to $6.7 million in career WPT winnings and leads the all-time money list for the longstanding tour, which is now in its 13th season.

Conniff beat out Alexander Lakhov heads-up. Lakhov re-raised all-in before the flop with 10-6 and Conniff snap-called with A-Q, which held for the win. Lakhov won the Season XIII WPT Merit North Cyprus Classic.

Conniff has been on a tear as of late. He took down the opening event of the Borgata Spring Poker Open for over $200,000 and won a $1,600 satellite for the WPT Championship online. Speaking of online, Conniff has $76,000 in winnings on Borgata Poker in New Jersey in his PocketFives profile and owns three GSSS titles.

The attendance at this year’s WPT Championship (239) was down sharply from 2014, when 328 players turned out. 2014 was the first year the tournament featured a $15,000 buy-in, down from $25,000. This year was the second that the season-ending WPT Championship has been held in Atlantic City.

Here’s how the WPT Championship final table cashed out:

Congrats to Conniff on his WPT title!