Unless you were camped out under a rock on Sunday, you know that The Masters golf tournament wrapped up at August National Golf Club in Augusta, Georgia. It was a wild weekend, from heavy winds to a monumental implosion by 2015 winner Jordan Spieth.

The daily fantasy sports site DraftKings held its first PGA Millionaire Maker of the year for The Masters, offering the Average Joe a chance to turn $20 into $1 million. By the time the final putt was made on Sunday, ‘bidle‘, who didn’t start the day in the top 10, earned $1 million and cemented his name in fantasy sports history.

‘bidle’ hit the nail on the head when it came to his lineup. As you’d expect, he rostered The Masters’ champion, Danny Willett, who was 16.8% owned, the highest percentage of anyone in the winning lineup. Willett’s 13 birdies and the all-important green jacket meant a score of 93.5 points on DraftKings, about one-fifth of the winning score of 478.5.

Despite not winning The Masters for the second straight year, Spieth generated the most number of points for ‘bidle’ at 101. Spieth, who at one point was up by five strokes on the rest of the field Sunday, collapsed on the 12th hole, scoring a quadruple bogey thanks to two water shots. However, he had 22 birdies, including four in a row, and finished in a tie for second place with Lee Westwood. Spieth was less than 10% owned due to his high price tag.

Speaking of Westwood, ‘bidle’ rostered him as well. Westwood was the lowest-owned player in the winning lineup at a scant 2.7% and scored 90.5 points. Westwood had 16 birdies and an eagle.

Paul Casey, who took fourth place at The Masters, appeared in the winning lineup from ‘bidle’ as well. Casey scored 80 points on DraftKings for his Masters outing, which included 16 birdies. Casey was the second-most owned player for ‘bidle’ at 16.3%.

Rounding out the $1 million lineup from ‘bidle’ were Hideki Matsuyama and Troy Merritt, who finished seventh and 42nd, respectively. Merritt was largely a dud and scored just 40 points for ‘bidle’, but Matsuyama and his 12.9% ownership paid off in a big way, as he amassed 73.5 points on DraftKings and finished in the top 10 at The Masters. 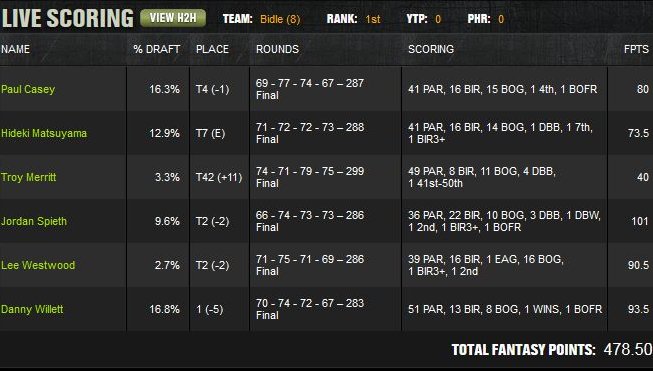 Here were the top 10 finishers: