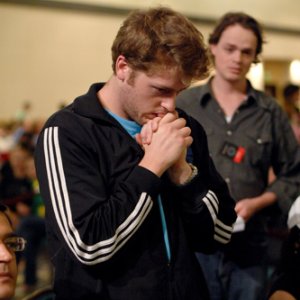 On Sunday, Bryan bparisParis (pictured) became just the fifth PocketFiver ever to hit $7.5 million in online tournament cashesand the first to do so since November. To that end, Paris joins a prestigious group that also includes Jeremy daisyxoxoFitzpatrick, Shyam s_dot11Srinivasan, p0cket00, and Chris moorman1 Moorman.

PocketFives: Thank you for joining us. How does it feel to hit $7.5 million in cashes?

Bryan Paris: Pretty sweet. It kind of snuck up on me. I didn’t realize I was getting so close until recently. When I saw how few people have done it, it put into perspective just how much that is. I guess I have more tolerance for online grinding than a lot of old school online pros who have since focused more on live poker.

PocketFives: Did you ever think that when you started playing full-time you’d get to this point?

Bryan Paris: Not consciously, but when I was starting out, I never really envisioned an end point for my online poker career. I guess I assumed I’d inevitably hit it at some point in the indeterminate future. I was pretty proud when I hit $5 million because I feel like that’s a solid milestone to achieve. Prior to that point, I was always focused on hitting $5 million. Since then, I haven’t paid too much attention to my pace for $7.5 million until recently, but I’m somewhat surprised I hit it this fast, as I hit $5 million a bit less than two years ago.

PocketFives: What advice do you have for up-and-coming players?

Bryan Paris: There are lots of things I could say, but one very important one is to make sure you’re always learning, evolving, and keeping an eye out for new opportunities. What has worked for you yesterday and today will likely not work tomorrow. I know the games have changed immeasurably since I started and I’ve seen tons of guys who were winning regs back in the day fall off because they failed to evolve.

Another one is to make sure you have more money in your bankroll than you think you need because you never know what this game will throw at you. To stick around for the long-run, you have to fade all sorts of variance both on and off the tables.

PocketFives: Are you still waiting for that big live score? Is that a priority?

Bryan Paris: I had a taste of that earlier this year when I won a €2K side event and then got fourth in another €2K side event on the same day at the EPT Grand Final. I also binked fourth in a Eureka tournament for €73K this March. I still haven’t had that huge live score, but finally getting a taste of live success has definitely motivated me to try to get it. I’ve been playing every stop on the EPT since I moved to Amsterdam around September 2013 and plan on continuing that for at least another year or two. 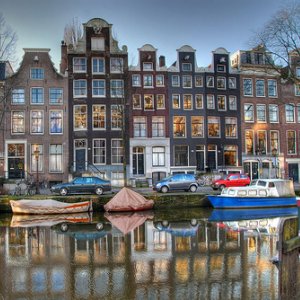 PocketFives: How is Amsterdam? Are you happy to be there?

Bryan Paris: Yeah, it’s a great place to live other than the winter weather. It is pretty close to most of the EPT stops and there are lots of things to do. I’m a big fan of the European lifestyle, so I’ve very much enjoyed my time in exile over here. With that said, I will likely move back to the US at some point once they figure out online poker.

PocketFives: Remind us how you got started in poker.

Bryan Paris: I was always a bit of a card game nerd. I used to play Magic growing up. Then, I played a lot of home games with my friends in high school for relatively small stakes. Once I went to college and found out about online poker in 2003, I started grinding $1/$2 NL on PokerStars back when the biggest game was $3/$6.

During college, I moved from cash to MTTs and SNGs, but kept playing and paying the bills, including a study abroad program at Cambridge where I met my fiancée. Upon graduating, I stayed on the grind and it hasn’t failed me yet.

Bryan Paris: After all these years grinding, I’ve had some desire to diversify my income streams within poker, so I’m moving into part-time coaching with a small number of students. I’ve set up a site at bparispoker.com, so anyone who may be interested can send me a message through the portal there. I’ve also started a blog about poker, travel, and whatever else crosses my mind at any given time and that will be up on the website as well.