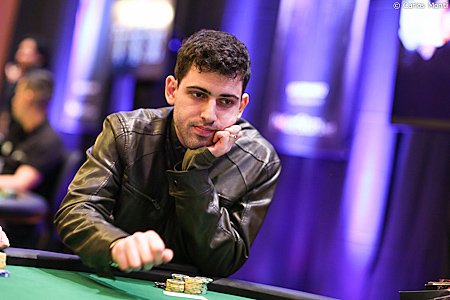 Banking $110,000 in four-and-a-half hours is one heck of a feat. Winning the first three-phase tournament ever held on PokerStars is quite impressive too. Add in beating a mammoth field of 53,311 entrants and you have yourself quite a day. However, the win comes with a silver lining for the community in his home nation.

That day was called “Thursday” for Brazil’s Helio ‘hneves182‘ Neves, who won the opening event of the PokerStars Turbo Championship of Online Poker, or TCOOP, for $110,000. The three-phase six-max tournament, the first of its kind on PokerStars, had 53,311 entrants.

Despite being in second place when the final table began, Neves knocked out every other player en route to the win. All of them. The Brazilian had a better than a 7:1 chip lead entering heads-up play and the action ended after just five hands.

“I feel pretty good. Winning any tournament naturally comes with a sense of accomplishment and relief, and the bigger the tournament, the bigger that feeling gets,” said Neves.

The $110,000 cash is his largest ever in an online MTT and raised his career winnings north of $1.2 million. Still, it’s more about moving up in the PocketFives Rankings and getting a little bragging rights than the Benjamins.

“I have everything I want or need,” he said. “At this point, money coming in just means more security for the future. I am much happier for the accomplishment of winning a COOP event after so many years; for winning a big tourney; and for, if my math is correct, getting to #1 in Brazil’s PocketFives’ rankings and getting into the top 20 in the world than for the money.”

His previous best result in a COOP event was a $40,000 score for getting second in a SCOOP $2,100 No Limit Hold’em Ten-Max event in 2011. Two years ago, he took fourth in a similar SCOOP tournament for $34,000, but as he said, Thursday marked his first COOP title.

The Brazil poker contingent on PocketFives is currently 3,527 members strong with total winnings of over $323 million. In the last 12 months, 633 members from Brazil have come on board. While Neves takes some nationalistic pride that the Brazilian poker fan base is both rabid and growing by leaps and bounds, his love of country stops there.

“There are always a lot of Brazilians railing and cheering, but I can’t say I have many feelings of patriotism since the country is messed up in every way possible,” said Neves. “All politicians are corrupt far beyond what other countries could imagine, the laws make no sense, the taxes rape everyone, and it is a socialist nightmare. Some people also try to take advantage of each other and will rob you at the first opportunity.”

Neves identified a few areas of concern for his homeland. Paying 50% taxes on purchases while at the same time gleefully accepting a $30 per month government assistance check seems a bit disingenuous.

Playing poker can offer a sort of escape from what he believes are the harsh realities of the Brazilian landscape. The average income of a Brazilian is $540 per month, or $6,500 per year. Then, remember that Neves just made $111,000 in four hours and you can see some of the dilemma he faces, especially as a well-known pro.

“Everybody just gets loans and gets more taken advantage of by banks and spends their life in debt,” he said. “For sure playing poker is very appealing, most of all because I don’t depend on anything inside the country for it. Instead, I can leave and play anywhere else I want to.”

Still, Neves stays close to home and his friends and family. Despite the troubles, Brazil’s income tax situation isn’t all that bad.

“Income tax is not that ridiculous here, either. The standard is about 27%, but the hidden taxes are the worst, like paying almost $1 for one liter of gas while having plenty of oil in the country,” said Neves. “Basically, everything you buy anywhere is a least twice what the minimum fair price would be.”