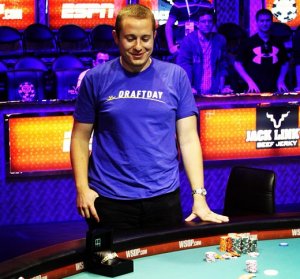 Eight players remain in the World Series of Poker’s $10,000 Seven Card Stud Championship, including three brand name members of the online poker community. Brian Stinger885 Hastings (pictured), a longtime fixture of the poker and daily fantasy sports worlds, leads the way with a stack of 770,000. Hastings was a top-five chip leader after Day 1 and has already cashed in three WSOP events this year. 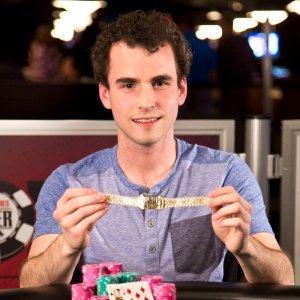 Hastings has a lot on the line in addition to the bracelet, as WSOP coverage explained, “He is currently ranked #23 in the 2015 WSOP Player of the Year standings and is guaranteed at least another 245.15 points for eighth place, which would put him in the top 10 on the POY leaderboard.”

Here’s how the final eight will stack up when play resumes at 2pm Pacific Time on Saturday:

Hastings Tweeted after Friday’s play had ended, “Bagged either 769k or 770k depending on whether I win the chip race. Probably 770k #yupiwonit #bracelethunting #WSOP27 Restart 2pm.”