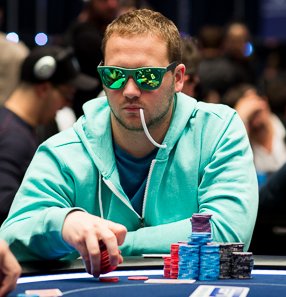 We’re down to 16 players in the World Series of Poker’s $25,000 Mixed-Max No Limit Hold’em event from the Rio in Las Vegas. Play on Thursday will be four-handed, at which point heads-up matches will determine who goes home with the coveted WSOP bracelet. There are a bundle of recognizable names in the field and a nearly $900,000 first place payday is on the line.

The lead heading into four-handed play belongs to Al Decarolis, a restaurateur originally from California who amazingly had exactly zero live cashes to his name until this event. He bagged up 1.26 million in chips to end play on Wednesday in Las Vegas, slightly ahead of the 1.25 million belonging to longtime poker pro and two-time bracelet winner JC Tran, who was fifth in last year’s Main Event.

PocketFiver Cal cal42688 Anderson (pictured above), a former #1 player on our site, has the fifth largest stack with 16 remaining. Anderson scooped a six-figure pot late in the day on Wednesday after betting 104,000 on a board of 3-A-6-K-K and getting a call from Tran, who tossed his cards into the muck when Anderson tabled A-J for two pair.

Several hands before, Anderson doubled up Matt Giannettiafter the latter called all-in on a flop of K-J-5. Giannetti, who finished fourth in the 2011 Main Event, showed A-K for top pair, while Anderson had Q-10 for a straight draw. The board ran out J-3, shaving Anderson’s chip stack by nearly 300,000. Anderson is fresh off winning his record-tying fifth SCOOP event. 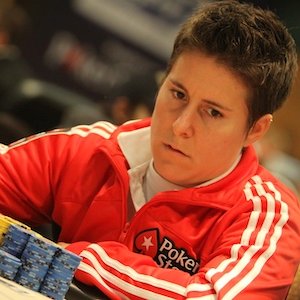 Vanessa Selbst (pictured) and Jason Mo sit third and fourth on the $25K Mixed-Max leaderboard, respectively, entering Thursday’s play. Selbst was the leader in the clubhouse after Day 1 and helped our current chip leader amass a significant number of chips early on. As coverage explained, “Decarolis scored a key double up early in the day against start-of-day chip leader Vanessa Selbst. In that hand, Decarolis flopped a set of tens against Selbst’s top two pair and held for a double up.”

Finally, let’s talk about Phil Ivey, who, as we should remind readers, has a joint bracelet prop bet with Daniel Negreanuthat garnered a considerable amount of interest. Ivey sent Justin ZeeJustinBonomo to the rail on Wednesday in the Mixed-Max event and then hit a two-outer to bust Eugene Katchalov a few minutes later. It seemed, at least for a moment, as if Ivey’s bracelet bet would pay off in his first event.

But, it wasn’t meant to be. On a flop of K-Q-J, all clubs, Ivey’s money went in with A-10 of spades for a straight, while Tran showed 8-7 of clubs for a flush. The 10c on the turn and Ad on the river sent Ivey packing. 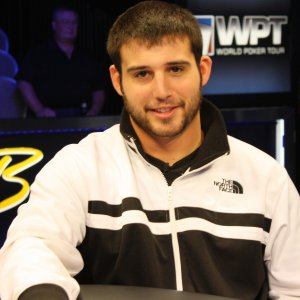 Here are the 16 players remaining:

Stay tuned to PocketFives for the latest WSOP coverage, made possible by Real Gaming.