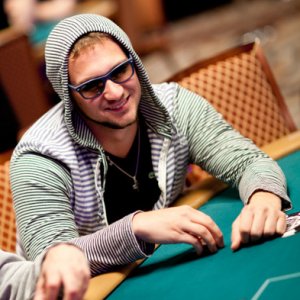 We have a tie! On Friday, Cal cal42688Anderson (pictured), a former #1 ranked player here on PocketFives, tied the record by getting his fifth PokerStars Spring Championship of Online Poker watch. According to PokerStars, Anderson came mighty close to several victories already this year, making six final tables during the 2014 SCOOP before Friday’s win:

Anderson ultimately got over the hump in a $2,100 HORSE event on Friday that drew 111 entrants and had a prize pool of $222,000. He chopped heads-up with Mikhail MiklelerSemin (pictured below), but came away with the all-important victory and tied fellow PocketFiver Shaun shaundeebDeeb for the most number of SCOOP wins ever at five.

On the strength of seven final tables and one win, Anderson leads the SCOOP Player of the Series leaderboard and has $5.5 million in tracked scores on his PocketFives profile, nearly $4 million of which has come on PokerStars. He was last ranked #1 on our site in November 2013 and is currently #4 in the Mexico poker community.

He posted on Twitter after his latest SCOOP victory, “After 6 final tables, I finally won another scoop! 2K horse weeeee.” He was camped out in Playa del Carmen during his SCOOP run after flying in from London on the third day of May.

Anderson had to navigate a minefield in the $2,100 HORSE event in order to get a win. Here’s how the final eight players cashed out:

Anderson’s five SCOOP wins are as follows. Note that each one has come in a different genre of poker: