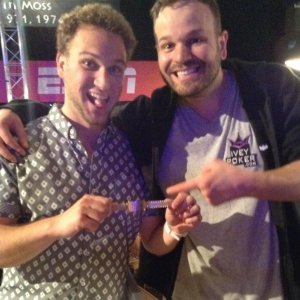 “I wouldn’t say it was easy; I just ran really good.” Those were comments from Calvin cal42688Anderson to World Series of Poker staff after his victory on Sunday at the Rio in a $1,500 Seven Card Stud Hi-Lo Eight or Better tournament. “Seven Stud Hi-Lo isn’t a game where you can just start bluffing people in. You have to draw some cards and some cards have to go your way. But, I felt I played really well. I took my time on all the decisions. There were a lot of good opponents for sure, but I ran really good.” Anderson is pictured, left, with fellow former #1 player Griffin Flush_EntityBenger.

Anderson, a former #1 player on PocketFives who is currently ranked #30, started the final table with a middle of the road stack. However, he quickly turned on the jets, as when five players remained, the Oklahoma native had more chips than the rest of the table combined.

He added what a gold bracelet means to him: “It’s a good feeling to win the gold bracelet. I wouldn’t say it completely validates me and what I do for a career. I’ve had a lot of success, although I will certainly get a lot more recognition from this. It’s definitely a good thing, especially after coming close a few times.” Anderson final tabled a $10,000 HORSE event earlier this month and has won nearly a quarter of a million dollars from his WSOP cashes thus far in 2014.

Online, Anderson has a sterling $5.5 million in MTT winnings, including a $303,000 hit for taking down the Full Tilt Poker$1.5 Million Guarantee in 2011. He has SCOOP and WCOOP wins on PokerStars and has won that site’s Sunday Second Chance three times.

Anderson’s bracelet was the 12th claimed by members of the PocketFives community this year through 30 completed events. Here’s how the final table of the $1,500 Stud event cashed out: 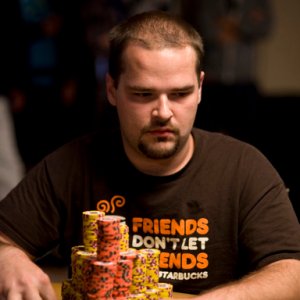 His biggest hand of the day came with, you guessed it, pocket fives. He flopped a set with our eponymous hand and eliminated Alessandro Bardaro in 16th place to add 475,000 to his stack. Here’s how the final 15 look:

Stay tuned to PocketFives for the latest WSOP news, sponsored by Real Gaming.