When World Series of Poker commentator David Tuchman reached out to Nathan ‘surfbum’ Gamble to provide guest commentary for the final table of Event #6 ($600 Omaha Hi-Lo 8-or-better), Gamble was happy to accept. 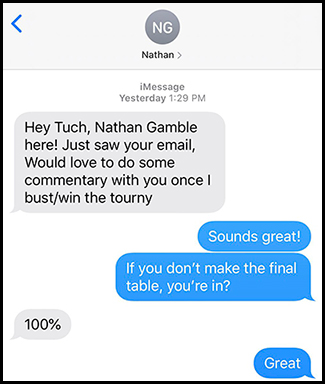 Hours later, Tuchman had an opening for a PLO8 analyst on his WSOP Twitch broadcast as 30-year-old professional mixed game specialist Gamble was, indeed, at the final table in search of a second career World Series of Poker gold bracelet and the first-place prize of over $89,000.

For anyone paying close attention, Gamble’s ascension to the upper echelon of the mixed games could be viewed through his incredible PLO8 resume. Since 2017, the World Series of Poker has held ten PLO8 or PLO8 variant tournaments. Gamble has cashed in six of them, winning two.

Gamble won his first WSOP event back in 2017, taking down the $1,500 PLO8 event that year for over $223,000. But back then, for him, it was a very different experience. His final table was shoved into the back of the Amazon Room of the Rio, giving way for the $50K Poker Players Championship to take the main stage. Gamble had one family friend on his rail and when it was over, his “surreal victory” was enjoyed mostly by himself.

Plenty has changed in the three years since his first bracelet win. Gamble is a bit of “pros pro”, a game starter in the Wynn’s $80/$160 Mixed. In his nearly two years since moving to Las Vegas to pursue playing live poker professionally, he’s evolved into being thought of as a “guy who kinda knows what he’s doing” into a regular in the high limit mixed games community – with what feels like “the full support of the industry” behind him.

When you talk to Gamble, it’s clear that his love of mixed games is less about the money, a and more the people he’s met along the way.

“I don’t play much No Limit anymore. if you look at my cashes I’ve played the Main Event one time. I made a deep run in it but I never played it again. In mixed games, people are more open, more talkative and it’s more dynamic,” Gamble said. “It’s a lot more of that fun environment that, even if you are winning or losing, people enjoy themselves.”

It’s this community that Gamble credits in his continued passion for all facets of poker, not just No Limit Hold’em.

“It’s the camaraderie. We’ve built a pretty large community at this point and we’ll have people just stop in and ask ‘What are ya’ll doing? You’re so fun and you’re talkative,’” Gamble says, his Texas roots showing.

“We’ve had people sit down simply because we’re having fun and enjoying ourselves. It’s almost like what you would hear about back in the day about Bobby’s Room. People they’re no way they’re playing for real money, they’re so friendly…but half of us literally go out for lunch and we hang out and enjoy each other’s company but at the same time it’s competitive on the felt.”

Gamble’s interest strayed from No Limit Hold’em from the get-go. He recalls playing free-to-play online poker when he was 13, looking to build a bigger free chip bankroll.

“I noticed that the Pot Limit Omaha side played bigger and you could build up chips faster,” he said, “It was more swingy and more ‘gambley’.”

Eventually, his dad gave him $11 to play a tournament, which, when it was canceled he was allowed to keep. He took that $11 and found an edge playing in alternate forms of poker. Where people were lacking skill he says he “instantly found a niche.”

He honed his mixed game skills in the pre-Black Friday tables of Full Tilt Poker, putting in work in PLO while others were battling in No Limit.

“I would get in 100 reps a day of PLO8 Sit & Go’s, and that’s why I think it’s extremely hard to learn the game now because it’s not online, there’s no sit and goes. You have two or three tournaments weekly so it’s very difficult for people to learn,” he recalled. “I just happened to be fortunate enough to learn a game that there’s not a lot of work done on.”

And here in the 2020 World Series of Poker, that work is continuing to pay off. On Monday night Gamble found himself in line to add to his PLO accomplishments.

“At every single break for the first ten hours of the tournament, I was between first and fifth in chips. And I told people, ‘this is just flowing, I’m on the right trajectory, everything is going as smoothly as can be.”

But at the final table, the one he was supposed to be commentating on, he found himself short-stacked, and doubt began to creep in. Was he really going pull of another gold-bracelet moment? Rather than talking to an audience, he spoke to himself.

“But then you say, ‘OK, I’ve been here before, I know what to do and if the cards break slightly in my favor – I’m a favorite to win this.’”

“When the very last card came off…that’s when it all hit. Up until then, I was just in a zone. And you don’t even realize it, you are just in a complete, absolute zone. I didn’t know what we were playing for, I didn’t really care what we were playing for but as soon as that card hit I instantly realized I won it,” he said. “The adrenaline hit and it took me back to when I won my first bracelet in 2017 where you’re in disbelief and it doesn’t feel real.”

But there’s a distinct difference this year from 2017, and it’s not due to society’s current pandemic.

“This year, through playing mixed games, I’ve met some of the most incredible players in this community. So, on break, I would call Brandon Shack-Harris and we would talk things through. I talked with Ali Nejad…I just had a rail that was really there to support me and that meant a lot,” he said. ”I don’t know if I would have won if it wasn’t for my rail and the people I’ve made friends with since the first one. I really do owe them. The difference between the first and the second was the first was all me, the second was due to the community I’ve grown a part of.”

“That, to me, means more than the actual bracelet.”