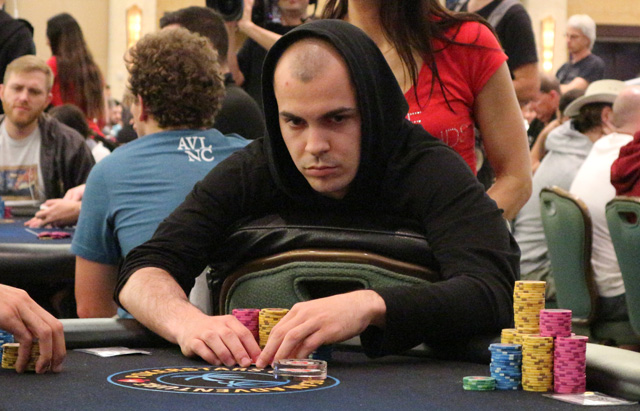 Last Friday night, Cord Garcia was sitting at a table in the Gardens Casino in Los Angeles, California grinding his way through a $175 buy-in tournament with almost 900 runners. Garcia won the event, adding the $48,000 first place prize to his bankroll.

Monday afternoon, he was in the Bahamas, playing the $25,000 buy-in PokerStars Players No Limit Championship event and was one of 400 players still chasing the $5,000,000 top prize.

“I mean I planned to play (the PSPC) anyways and (the Gardens event) was a one-day tournament, so it would still give me the next to either travel or rest and travel the morning of the event. So that’s what I did and it worked out,” said Garcia.

And that’s exactly what he did. Garcia flew from L.A. to Fort Lauderdale overnight Saturday night before boarding an early morning flight to Nassau to jump into the PSPC. Once there, he knew he was entering into a different type of field than the one he’d just conquered.

“I think it’s definitely one of the more extreme cases,” Garcia said about the difference between the two fields. “That being said, I’ve been doing this for a while so I think that I can play any level of buy-in, I just have to mentally prepare myself for what I am playing and adjust accordingly.”

On Day 2, Garcia was at a table that included Kristen Bicknell, Dan O’Brien, Blair Hinkle, and Tony Gregg, a far cry from the final table in Los Angeles that included only one other with more than $1,000,000 in earnings, Don Nguyen. Garcia’s been around long enough to know what the adjustments he has to make are based on the quality of the PSPC field.

“Obviously as we get deeper, the play is going to get better. The players are going to get tougher, statistically speaking, so I’ll have to adjust to more GTO style and solved plays rather than push-shove charts in a smaller buy-in where there’s not that much skill,” said Garcia. “Here, you have time, so I think that just have to realize that there’s a lot more patience to be played here and well-timed aggression.”

Garcia’s Day 2 run ended with a mid-day bust out, but having traveled some 2,500 miles to get here, he’s going to stick around and play other tournaments and hopes his run good carries over.

“I’m going to stay here through the 17th unless I feel drastically different but as of now my plans are to stay through the Main,” said Garcia.