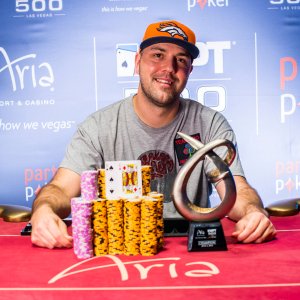 In recent days, thousands of eyes were trained squarely on the felts at the Aria Resort and Casino in Las Vegas for the conclusion of the WPT500. Days 2 and 3 of this gigantic event were held on Sunday and Monday, respectively, and when all was said and done, Craig imgrinding Varnell (pictured) took home the trophy and $330,000.

The WPT500 is an interesting tournament with a unique schedule. Not designed to specifically compete with the World Series of Poker, it still appears to have been created as a way for the WPT to capitalize on the thousands of poker players in Las Vegas for the WSOP. Held right before the Main Event, it gives players the opportunity to compete in a large-field tournament for a much lower buy-in, just $500. Tournament organizers guaranteed a $2 million prize pool.

There were ten starting days for the WPT500. The first six, Days 1A through 1F, were held May 31 to June 8, while the last four took place July 2 to July 5. In between, Aria hosted a string of smaller buy-in tourneys. 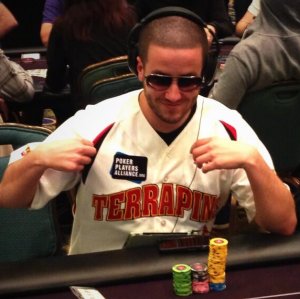 There was a bit of controversy surrounding the WPT500 last year, although it really emanated from just one person: 2012 WSOP Main Event champ Greg Merson(pictured). The weekend the 2014 WSOP Main Event began, Merson went on a Twitter rant about the WPT500 being disrespectful to the WSOP, calling it a “money grab.”

Merson felt that it was wrong that the WPT500 was being held right before the WSOP Main Event. However, most everybody understood that a $500 buy-in tournament was not going to compete with the $10,000 Main Event and that, although the two events overlapped slightly, players could easily do both if they made sure they understood the schedule.

That might have been good press for the WPT, though, as the field skyrocketed from last year’s 3,599 to this year’s 5,113, making the 2015 WPT500 the largest event in WPT history. The prize pool was $2,556,500, clearing the guarantee by more than half-a-million dollars.

Varnell was absolutely thrilled with the win, telling the WPT after the match, “This feels surreal. You have no idea how happy I am. I love poker; I love the game. I’m blessed to be here.”

The $330,000 first prize more than doubles his lifetime live tournament winnings, taking him up over $600,000 for his career (figures courtesy TheHendonMob). His previous best score came just last week when he finished third in the $1,000 WSOP online event for $73,079.

Varnell is also a member of PocketFives, registered under the screen name imgrinding. In online tournaments tracked by us, he has won $332,586, with a top cash of $90,734 from winning a $216 No Limit Hold’em Deep Stack event on Full Tilt in January 2007. If our records are any indication, it appears that that Black Friday put the kibosh on his internet play, as his last online cash was in March 2011.