One day after ‘pwnasaurus’ won the DraftKings Fantasy Basketball World Championship, another winner was crowned, this time on the hockey rink. His name: Dan ‘pimpbotlove’ Barbarisi. His first place prize: $100,000.

Barbarisi won the Fantasy Hockey World Championship, a one-day NHL game on DraftKings that had a $500,000 prize pool and 40 entrants. Barbarisi racked up a score of 47.3 points on Saturday, good enough for a 1.5-point win.

Barbarisi said when the final buzzer sounded, “I still don’t understand how that happened. To have this experience is really an incredible phenomenon and I really look forward to celebrating that for about the next three hours and 45 minutes until San Diego closes.”

Down the stretch, Barbarisi and the eventual second place finisher, ‘jbo2727‘, jockeyed back and forth for the title. Ultimately, two huge scores from Brian Elliott and Jaden Schwartz propelled Barbarisi to victory. The former, a goalie, had a win, 19 saves, and a shutout, good for 8.8 points, while Schwartz had a goal, four shots on goal, an assist, and two blocked shots, good for eight points. Those two combined for one-third of Barbarisi’s total score.

Three other players had more than five points for the winning lineup: Vladimir Tarasenko, Jean-Gabriel Pageau, and Zack Smith. Tarasenko had one goal on eight shots for 7.5 points, Smith had six shots and an assist for six points, and Pageau added a goal and 5.5 points. The latter two were just 12.5% and 10% owned, respectively. 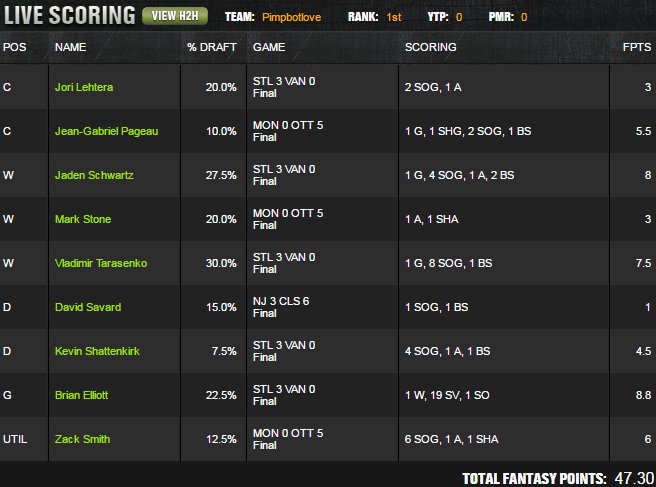 The action in the hockey finals took place in the same room full of plush white couches as the basketball finals on Friday. This time, instead of players decked out in basketball jerseys, heavy hockey gear was worn for teams like the Ducks and Penguins. Television screens showed the leaderboard for the ultimate sweat and games were beamed to all in attendance.

Here were the final scores from the DraftKings Fantasy Hockey World Championship in San Diego:

Everyone who made it to the live final in Southern California earned at least $5,000. A total of eight NHL games were on the Saturday night slate and nine entrants in the Fantasy Hockey World Championship had multiple lineups.