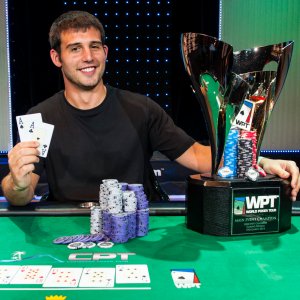 History was made in the Caribbean on Friday, as longtime PocketFiver Darren darrenelias Elias (pictured) became the first person ever to win back-to-back World Poker Tour Main Events in the same season.

Elias won the WPT Borgata Poker Open in September in Atlantic City and followed that up with a victory in the WPT Caribbean event in St. Maarten on Friday. According to WPT officials, “Elias [also]becomes the first player to win multiple WPT Main Events in the same season since Season III. Both Tuan Le and Daniel Negreanu won a pair of events in Season III and Negreanu was crowned WPT Player of the Year.” 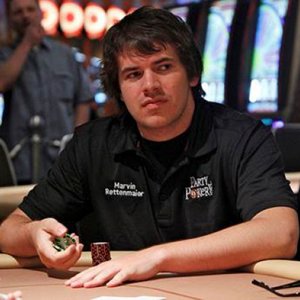 The first person ever to win back-to-back WPT Main Events was Marvin Rettenmaier (pictured), who took down the Season X WPT World Championship and the Season XI WPT Merit Cyprus Classic, but failed to secure both titles in the same season.

The Caribbean event marked Elias’ seventh WPT in the money finish. Incredibly, four of those are final tables. He finished fifth in the 2011 Borgata Poker Open Main Event for $230,000 and followed that up a few months later with a third place showing in Jacksonville for $147,000. Elias’ Borgata Poker Open Main Event win in September was worth $843,000, bringing his all-time live earnings to north of $2.5 million, according to the Hendon Mob.

Elias was nearly a 5:1 dog entering heads-up play in St. Maarten against Christophe Rosso, but doubled up twice to claim the chip lead. Rosso turned in two double-ups of his own and on the final hand, he moved all-in before the flop with 7-6, but ran into Elias’ aces. Rosso actually made two pair on the turn, but the river paired the board, giving Elias aces-up for the record-setting title. Here were the WPT Caribbean final table results:

Online, Elias has $3.4 million in career tournament winnings and won the PokerStars Sunday Second Chance two weeks ago for $49,000. He has two monster wins online: a WCOOP High Roller victory in 2012 for $574,000 officially and a WCOOP Main Event final table two years prior for $396,000. Elias has five six-figure scores in his PocketFives profile.

Congrats to Elias for his historical finish in St. Maarten.