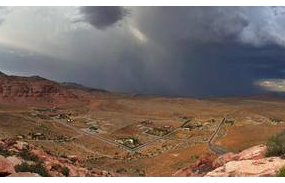 It was a stormy afternoon in Las Vegas on Monday. This author’s plane took off shortly before 4:00pm PT, but within a couple of hours, pictures on Twitter surfaced of a rain storm soaking Las Vegas.

Tournament organizers began the dinner break of Day 1B of the World Series of Poker Main Event ten minutes early due to a flash flood warning and the roof of the Brasilia Room started leaking. Trash cans were hauled into the playing area to catch the cascading water and several tables were covered with tarps to protect them from getting wet.

By the time I landed, WSOP officials were moving players out of the Brasilia Room following the dinner break. One message read, “With the heavy storm outside, water has leaked into a corner of the Brasilia Ballroom where playing tables were located. As a result, 23 tables are being relocated after dinner to the Amazon Room.” 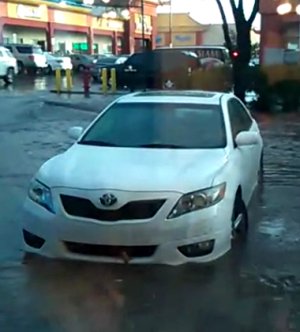 Then there was Chris Moneymaker, the 2003 WSOP Main Event champion, who was stuck down the street from the Rio at Fukuburger, where PokerStars was giving away free food. Moneymaker, who was playing on Day 1B, was stranded alongside Brad Willis, who Tweeted, “I am trapped with @CMONEYMAKER and many others in a flash flood. We’re fine, but this is no joke.” A screen shot from a video Moneymaker took is pictured.

Weather aside, Day 1B attracted 1,716 entrants. Combined with Day 1A’s 741 entrants, that means we’re up to 2,457 poker hopefuls thus far, with one more starting day on tap for Tuesday. Day 1C will be the largest starting day by far, but it seems possible that the Main Event could fail to reach 6,000 entrants for the first time since 2005.

Reigning WSOP Player of the Year George Danzer started the festivities on Monday with the “Shuffle up and deal” command. Hamid Feiz ended the day with the chip lead at 182,675, almost 30,000 ahead of the next closest player. Survivors of Days 1A, 1B, and 1C will return to the Rio on Wednesday for Day 2. 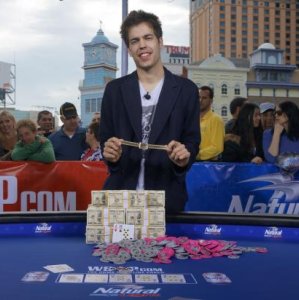 Among those finishing near the top of the pack on Monday was Dominik bounatirouIMO Nitsche (pictured), who took third in an Eight-Max event last month for $220,000 and won a bracelet last year in a $1,000 No Limit Hold’em tournament.

In May 2014, Nitsche took down the WSOP National Championship in Atlantic City. The three-time bracelet winner has $4.4 million in live tournament winnings according to the Hendon Mob, good for tenth place all-time in Germany.

2004 WSOP Main Event winner Greg Raymer was also in the field on Day 1B and bagged the 72nd largest stack at 92,200. Raymer took down a 4bet pot late on Monday after continuation-betting on the flop. David Singer called the clock on his opponent, who ultimately folded. Raymer has two in the money finishes at the WSOP this year, but has not hit a six-figure score at the WSOP since 2009.

Finally, we wanted to touch on Mike Gags30 Gagliano, who was seated in the Brasilia Room when the skies opened up and was relocated across the hall to the Amazon Room. He ended the day with a stack of 56,450, good for #332 on Day 1B. Gagliano won a pot with a full house late in the day and Tweeted, “56,450 to end the day. Coming back to 250/500 on Wed. Day off tomorrow. Gl to friends playing tomorrow.”

We should know the final attendance number for this year’s Main Event around 9:00pm PT on Tuesday. Best of luck to all PocketFivers!