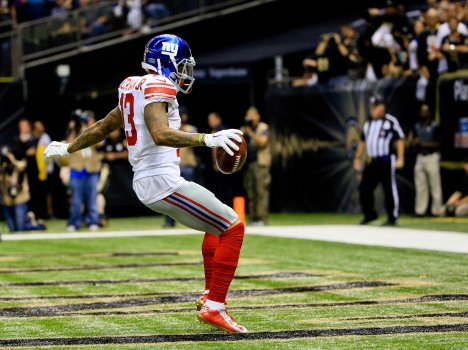 Eight weeks of the 2015 NFL season are in the books. Over on FanDuel, the latest winner of the Sunday Million was westcoast4, who tallied 215.54 points and earned $500,000. Entering Week 8, westcoast4 had just 35 wins on FanDuel and had been playing for a year. Let’s take a look at his winning lineup. Don’t forget to visit FanDuel to see what’s brewing for Week 9.

Brees was a beast over the weekend. Rotoworld described the Saints/Giants game as “defense optional.” At 101 points, it was the third highest scoring game in NFL history. Brees had 511 yards and seven touchdowns, which was good for 47.54 FanDuel Points. Coming off a largely disappointing season, his ownership percentage was extremely low.

Gurley continues to be one of the top-owned running backs, and for good reason. This week, he shredded a stout Arizona Cardinals run defense. In Week 9, he’ll be the most expensive running back on the board, which may make Devonta Freeman, who plays the 49ers, an interesting pivot.

Hillman came off the Broncos’ Week 7 bye as the team’s new lead back and scored twice. He had 19 carries to CJ Anderson’s 14, although Anderson also found the end zone. His low ownership percentage combined with a low price tag means Hillman provided solid differentiation for westcoast4. Hillman and Anderson will reportedly continue to split carries moving forward.

Just like Brees, Beckham had been stuck in a rut lately, but teed off for eight catches for 130 yards and three touchdowns, good for 35 FanDuel Points. As FanDuel put it, “Players like Beckham that have this kind of volatility scare off some owners in 50/50s, but they are crucial to success in tournaments.”

I’m pretty sure this is the lowest we’ll see Cooks’ price tag this season. Cooks found the end zone twice against a hapless Saints’ secondary, meaning westcoast4 had nine combined TDs out of Brees and his wide receiver, or 40 points.

Another chalk play, Diggs seemed destined to light up Chicago’s unimposing secondary, which is exactly what happened. Diggs led the Vikings in receiving, and it wasn’t even close, posting a 6-95-1 line. Diggs will continue to be a major part of the offense. His salary in Week 9 is on par with Randall Cobb and Mike Evans, so it’ll be interesting to see his ownership percentage moving forward. In Week 9, Evans gets the same Giants team that Brees carved up.

With Rob Gronkowski playing on Thursday, Olsen was the consensus top TE play of the Sunday to Monday slate. Still, given the monsoon-like conditions on Monday night in Charlotte, his 16.9 FanDuel Points were perhaps somewhat of a surprise.

Kickers are unpredictable. Bailey had four field goals, which made up all 12 of Dallas’ points. I personally would not start a kicker on a Matt Cassel-led team against one of the top defenses in the NFL, but I didn’t win $500,000 this weekend.

Playing against Zach Mettenberger at home, the Texans defense was definitely in play this week and recorded seven sacks. The hapless Titans fired their head coach on Tuesday to boot. The Texans have been run over by the likes of Matt Hasselbeck this season, but managed to stay stout against the Titans, registering 20 FanDuel Points.