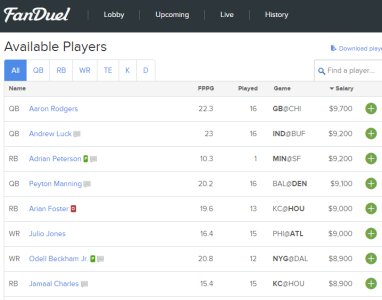 Here are some of the most common phrases you’ll see on daily fantasy sports sites like FanDuel, DraftKings, and StarsDraft, as well as articles here on PocketFives. We hope these will help you fill out lineups!

$/Point – Dollars of salary cap spent / fantasy point earned. The holy grail. Whoever consistently scores the most fantasy points/$ will win the most money (in cash games).

50/50 – A league in which the top half doubles their money and the bottom half loses.

Bankroll – The money you have set aside to play DFS with.

Balanced Lineup – A lineup made of all medium priced plays.

Cash Game – Contests that pay out a significant portion of entrants equally. These include head to heads, 50/50s, and triple-ups.

Ceiling – The most points that a player or team can conceivably score.

Chalk – The obvious and popular plays.

Contrarian – Against the herd. Not chalk.

Exposure – The amount of money you have at risk on a particular player. If you have 10 lineups in a contest and 5 of them have Peyton Manning, then you have 50% exposure to Peyton.

Fade – To avoid a player or situation. I’m fading Peyton and all the Patriots.

Floor – Opposite of ceiling. The minimum points a team could score.

Freeroll – Free to enter, cash and/or prizes for winning.

GOAT – Greatest of all Time

Late Swap – DraftKings allows you to change players around after lineups lock but before that particular player’s game starts. FanDuel allows no late swap.

Lineup Lock – The moment when you cannot enter contests for that slate any longer. On FanDuel you can no longer edit your lineups. The half hour before lineups lock can be stressful, especially in NBA.

Narrative – The story surrounding a player. Usually this is just noise, sometimes it has merit.

Overlay – When a GPP doesn’t cover the prize pool with entry fees. $10k guarantee, $10 entry, they only get 800 entrants, the contest overlaid by $2k. Site loses that money.

Pivot – To come off one player and on to another at a similar price point. Often used to describe contrarian plays.

Prop Bets – Bets offered by Vegas about a particular player’s performance. Will Peyton throw for 300 yards or not? Prop bets can give information about a player’s expectations.

Punt – A cheap play. I will punt this position because I don’t like any of the expensive options which will allow me to afford other more expensive plays I like.

Qualifier – The winner, usually just one, receives a trip to do something cool instead of money. These can be heartbreaking bankroll drainers, but they can also lead to some awesome experiences or live finals for a lot of money.

Satellite – A contest where a top percentage of entrants earn entry to a larger GPP in the future.

Splits – A player or team’s stats broken down into opposing categories, such as home vs road.

Stacking – To take multiple players from the same team in an effort to maximize a lineup’s ceiling.

Stars and Scrubs – A lineup made up of only cheap and expensive players.

Sweat – The process of watching scores and/or games during a fantasy contest.

Tilting – Losing your marbles as a result of gambling, usually leads to poor decisions.

Train – Multiple entries of the same lineup in the same contest. Only viable for cash games and satellites that pay multiple places.