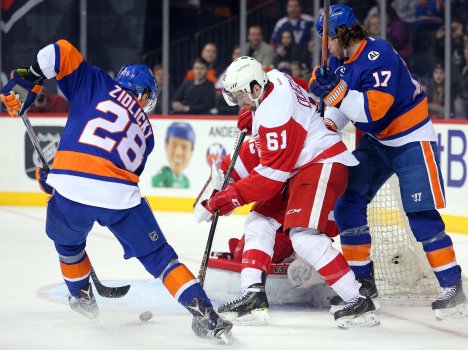 One of the most essential tools in the arsenal of a good DFS player, regardless of sport, is a solid set of research sources to call upon in their daily routine. Hockey is no exception, and just as in every other sport, there are advanced statistics documenting what’s going on over at the frozen pond.

As many reference tools as there are, there are multiple ways in which these resources can be employed depending on game type (cash or GPP), field size, and number of opponents, and your level of aggression. Level of aggression merely refers to how willing you are to go big or go home in shooting for GPP prizes.

The following are solid resources a DFS hockey player can use in order to assist him in roster construction. As is the case with every DFS sport, far and away the most important data is that player’s results over time. Every good player reviews his actual results and constantly re-calibrates depending on what is working for him and what is not.

Left Wing Lock – Left Wing Lock is a solid source of fundamental information. LWL lists the starting goalies for each night’s action along with a clickable source for their confirmation of each starting goalie listed. Left Wing Lock also updates any line changes that a team shows in the morning skate, along with injury news. This site has some advanced matchup metrics as well, so no matter how serious of a player you want to be, you can dig pretty deeply here.

Daily Faceoff – Daily Faceoff serves a very similar purpose as Left Wing Lock: listing starting goalies, sources of confirmation, and line assignments for even strength and power play. Oftentimes, one site will have important information updated that the other site does not, so it does serve the player to check both.

NHL.com – The NHL’s website has game previews, and due to their access to the coaching staffs, you will sometimes get an informative quote that tips off what player might be added to a power play unit or which guy might be dealing with some bumps and bruises and could be seeing reduced minutes that night. It also lists probable line assignments after the morning skate, and while these are never 100% accurate on any site, in a game of incomplete information, this information is better than just going off of the previous game’s box score.

Puckalytics – This is a great site for advanced stats and breaks down player performance by home/road, man advantage/man down, and has database flexibility, which lets you break a player’s advanced stat performance down by a range of games. There are many advanced stats out there for hockey, but the most popular ones, Corsi and Fenwick, can be found at Puckalytics. There are both individual and team stats, so a player can really get deep in these.

Rotoworld – Rotoworld is a good source of late-breaking news. You will often find information very close to faceoff such as who is not there for the pregame warmups. If you play on DraftKings with a late swap feature, keeping on top of changes can give you a leg up on your opponents, many of whom aren’t monitoring the site at 9:55pm for the 10pm game start.

There are many other sites that can give great NHL information, including the Twitter accounts of each team’s beat reporters as well as other DFS discussion boards such as RotoGrinders. Once again, the most valuable tool you have is the post-game analysis of your entries, which can be very difficult to do in the midst of a losing streak, but keep in mind that the harder it is to do mentally, the bigger an edge it gives you over your unwilling opponents.