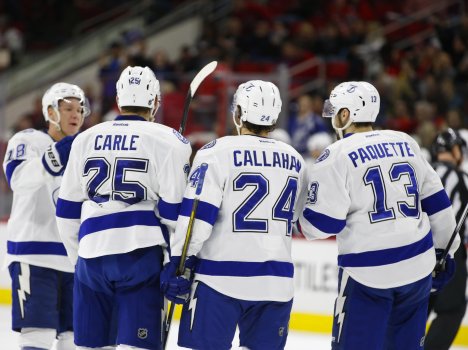 In this article, we will focus on the NHL, but the basic principles involved certainly translate to basketball and baseball in their own ways. When playing a GPP on a short-slate NHL card, we want to use game theory to go out of the box and give ourselves an edge over our competition.

The first thing to consider is the inherent edge in multi-entering in these tournaments. We are not looking to min-cash with a couple of lineups. Instead, we want to have multiple bullets to fire from a different angle.

NHL DFS is no different than any other sport’s GPPs in that the meat is at the top. Your ROI long-term will be higher with a couple of top-5 finishes and a bunch of complete misses than if you have 9 or 10 min-cashes and nothing more. In short, you will want to put in a handful of entries on a short slate with the understanding that many are being sacrificed for the glory of that one special entry.

Getting into specifics now, we want to assess the over/under goal total in each game along with the Las Vegas odds. It’s one thing to see an over/under of 5 goals posted on a DFS research site, but it’s way more important to frame that in the context of where the money is going. A game with a 5.5 goal over/under that is being bet in a way that the under is -165 (betting $165 to win $100) might be a far less juicy game than the one with a morning line of 5 that is being bet -165 on the over.

Vegas line movement can be a function of a number of factors, including morning skate injury news, the naming of a backup goalie to start, or simply a poor opening odds line. The factors don’t stop there, but the beauty of Vegas is that its accuracy is unmatched, so it is in essence doing much of the legwork for you.

There are a number of ways you can structure a short-slate card entry to maximize your chances, but one way that is a good start is by using an early game goalie along with late game skaters and vice-versa.

Say we are looking at a 4-game slate, 2 early, 2 late. If you split your entries with your favorite early goalie and your favorite late goalie, you have opened yourself up to some game theory on a couple of fronts.

If your early goalie spins a gem, you have points from that as well as your competition whiffing on any offensive players who faced your goalie. Depending on what the early scores look like, you can now structure your late skaters to maximize your odds if the scores are low, in essence treating it like a cash game and going high floor, or mix up one team with chalk skaters and another team with some 2nd line players with upside in a good matchup.

Conversely, if your early goalie fails, you know that chalky skaters will make up zero ground for you late. You can then shift gears and roster skaters who will be low owned such as guys on a solid road underdog. Your chances might not be great, but you are using game theory to maximize your upside in relation to your competition. There are many other ways to work the full day short-slate card, but the idea is to always think a step or two ahead of your competition. In time, you will find little game theory tricks that work for you.