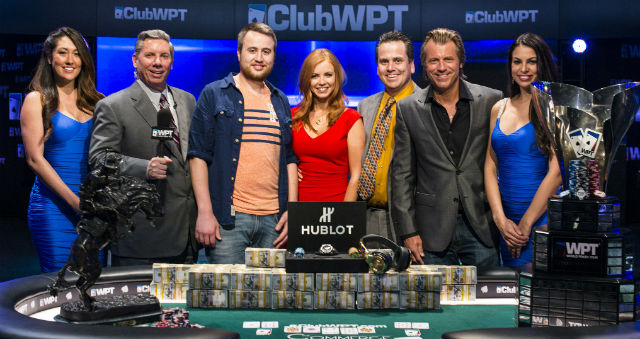 Shariati, who won the Legends of Poker at the Bicycle Casino last August, was looking to become the first player to win both Los Angeles-based WPT events. It wasn’t meant to be, though.

Anthony Spinella, winner of the online WSOP bracelet event last summer, started the final table with the chip lead, but was actually the first player eliminated.

The downhill slide for Spinella began on just the fifth hand when he dropped nearly 1 million chips to Fast. Seven hands later, he dropped another million to Sam Soverel and before 20 hands had been played, Spinella doubled Alex Keating up as well.

river was no help for Spinella and he was out in sixth.

It took 31 more hands for the next elimination. After Keating raised to 195,000 from the cutoff, Farid Jattin moved all in from the big blind. Keating called instantly and tabled

and Jattin was out in fifth.

With just four players left, Fast went to work. His first victim was Soverel in a blind vs blind battle. Action folded to Fast in the small blind. He called and Soverel checked. After the

river got Fast to bet 450,000 before Soverel tanked for nearly a minute. He moved all in for 2,750,000 and Fast took his time in the tank. After nearly four minutes, Fast called and after Soverel showed

for a busted straight, Fast turned over

to take the pot, eliminate Soverel in fourth, and assume the chip lead for the first time.

Fast didn’t wait long to bust somebody else. On the very next hand, Keating raised from the cutoff to 250,000, Fast re-raised from the button to 675,000. Keating announced he was all in for 4,885,000 and Fast called. Keating turned up

, but found himself behind Fast, who held

. Keating found no help on the

board and was out in third.

Thanks to those two eliminations, Fast held 11,975,000 of the 15,445,000 chips in play. It took only two hours for Fast to end the tournament. Despite a small double-up from Shariati, Fast held control for the entire heads-up battle.

On the final hand of the night, Fast opened with a raise to 450,000 before Shariati moved all in for 4,850,000. Fast took his time before calling and tabling

flop changed little, but the

turn put Shariati ahead, but the

Fast, who won the €550 Oktoberfest event at WSOP Europe in October 2015, pocketed $1,000,800 for the victory. He also gets a pair of gold Monster 24K headphones, a Hublot King watch, and a seat into the WPT Tournament of Champions next month in Florida.