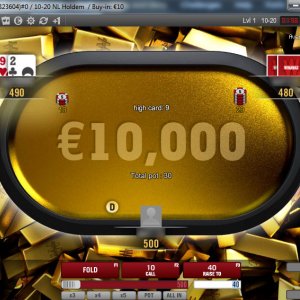 Lottery-type sit and gos are the new big thing in online poker, the next wave of games to attract casual players after fast-fold tournaments. To review, lottery sit and gos are short-handed, hyper-turbo, single-table tournaments with small buy-ins ranging from $1 to $10. Typically winner-take-all, they feature randomly drawn prize pools that are announced once the game starts.

About three-quarters of the time, the prize pool will be twice the buy-in, but in rare cases, it could go as high as 1,000 or 2,000 times the buy-in depending on the poker room. This mystery prize pool drawing is why they are called lottery sit and gos.

Winamaxwas the first poker room to offer lottery sit and gos, launching Expresso Poker (pictured above) almost exactly a year ago. The iPoker Network followed in January 2014 with Twister Poker. Full Tilt Pokerlaunched Jackpot Sit and Gos in June, while PokerStarsrolled out Spin and Go tournaments on its Spanish site earlier this month. Lottery sit and gos are clearly picking up steam. Click here for an article PocketFives published last September about the impact of Expresso Poker.

Upon iPoker’s Twister Poker launch in January, the cash game traffic monitor PokerScout pointed out that the game could siphon significant traffic from the network’s cash tables. Looking back at Winamax’s Expresso Poker launch, PokerScout said the game was so popular that cash game traffic took a major hit, falling 15 to 20 percent for several weeks before finally recovering in mid-September. Check out the numbers in the PokerScout Weekly Scouting Report.

To get a read on the significance of that in relation to the new game offering, PokerScout looked back to the same period last year and found that in those same 30 days in 2013, Full Tilt’s cash game traffic declined three percent. Thus, it is possible that Jackpot Sit and Gos have drawn five percent of Full Tilt’s cash game players away from the ring game tables. 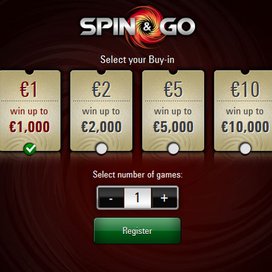 Of course, there is also the possibility that it has just been a bad 30 days and that Jackpot Sit and Gos have had nothing to do with it, but considering Winamax’s precedent, it is probably not wrong to assume that the new games have hurt the cash tables.

PokerScout has not seen any notable change in PokerStars’ cash game traffic in Spain since the launch of Spin and Gos. Overall, neither PokerStars nor Full Tilt Poker has felt nearly the same effects that Winamax did.

PokerScout gave no explanation for this, but it possible that it could have something to do with the player makeup of the different sites. PokerStars and Full Tilt Poker are generally known for having more serious players, ones that would not be as attracted to lottery sit and go tournaments.

PokerScout also noted that lottery sit and gos have proliferated much faster than did the previous craze, fast-fold poker. While Winamax started Expresso last July, three more sites and networks have launched their games since the beginning of 2014.

Full Tilt introduced Rush Poker in January 2010, but it took over two years for any of its competitors to launch a copycat game. PokerScout figures that this may have had to do with Full Tilt making it publicly known that it was seeking a patent on Rush Poker, which may have caused other rooms to hesitate for a while. Winamax never did anything of the sort, so its competitors may have just thrown caution to the wind and gone forward with plans for their lottery sit and go tributes.