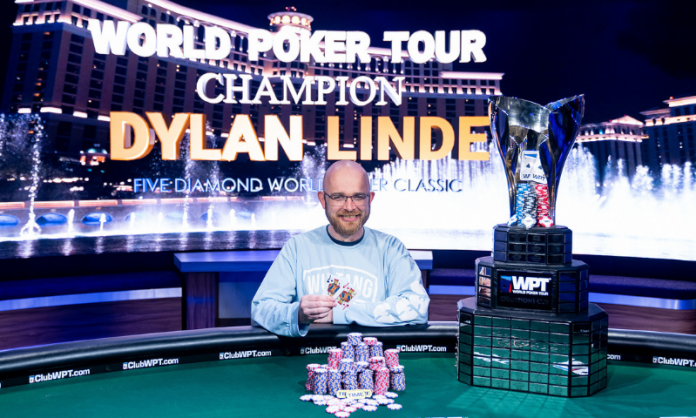 “Incredible… I’m stunned, I’m stunned,” Linde said after the victory, noticeably searching for the right words in the winning moment. “I was in for a lot of bullets in this tournament – I was in for five bullets – and all I wanted to do was get even. I was like, ‘OK, I need to get 24th place and then I make like 8K, that’s great.’ Then I got to there and it just felt like freerolling. I just was confident, I played my game – I mean, I’m still… I’m still in shock.”

Linde entered the final table of the record-setting event with just more than $2 million in live tournament earnings to his name. He nearly doubled that total thanks to scoring the largest live tournament score of his career. Not only did Linde earn a $1.631 million payday, but he claimed the title in one of poker’s most prestigious events, the WPT Five Diamond World Poker Classic at Bellagio. Linde now goes down in history alongside players such as Gus Hansen, Daniel Negreanu, Antonio Esfandiari, and Joe Hachem as a champion of this event.

“Incredible!” Linde said once again, more emphatically. “Besides having played a lot of poker for the past 10 or 11 years, I’m a gargantuan poker fan. I watch every single everything on PokerGO, I watch all broadcasts. Even weird cash games that have been televised, I consume it all. I love poker. To be there, to be here playing in the studio, it’s incredible. It’s just incredible. I watched the Super High Roller Bowl Cash Game this morning before I came to play.”

What’s more is that Linde topped a record-breaking field in the WPT Five Diamond World Poker Classic. The event attracted a field of 1,001 entries, nearly 200 more than the previous record of 812, and generated a prize pool of $9.709 million.

“It was like a roller coaster,” Linde said of firing multiple $10,000 bullets in the event. “The first one or two, it was like, ‘Ehhh, OK.’ And then when I busted bullet three, I was pretty sad and I kind of tilted. Then when I busted bullet four, I was just like, ‘Ya know? Whatever, this tournament is really good and I need to fire.’ At that point, I’ve already passed my pain threshold so now it doesn’t matter. I just try and it almost helped me to be in for five.”

*First place includes a $15,000 seat into the season-ending WPT Tournament of Champions.

couldn’t come from behind against the

of Skrbic, leaving Hutter with a sixth-place result worth $344,529.

Next to go was Lisa Hamilton in fifth place, and she was eliminated when her pocket fives couldn’t hold up against the

of Linde. The money went in preflop and Linde flopped top pair, turned trips, and rivered a full house to send Hamilton to the payout desk to collect her $451,880 in winnings.

Eliminating Hamilton in fifth place gave Linde the chip lead. This is when he really began to press on the gas in order to put distance between himself and his opponents. It also helped when Linde busted Ping Liu in fourth place with the

Action folded to Linde in the small blind, and he moved all in against Liu’s big blind. Liu was short stacked and called with the

Andrew Lichtenberger was the shortest stack entering three-handed play. He fought as hard as he could to get himself back into the match against Linde and Skrbic, but ultimately it wouldn’t be in the cards for the player so widely known as “LuckyChewy.”

Lichtenberger flopped top pair with the

flop against Skrbic holding the

for a flush draw. The two bet and raised back and forth to get all the money in, leaving Lichtenberger needing to fade the draw to stay alive. Skrbic quickly completed his flush on the turn with the

and the river completed the board with the

Linde held the chip lead entering heads-up play, with his 22.375 million to Skrbic’s 17.675 million. Linde dominated the duel and took just 35 hands to dispose of Skrbic.

On the final hand, Linde’s pocket jacks held up against the pocket fives for Skrbic after all the money went in preflop and that was all she wrote. Skrbic, who entered the event with less than $500,000 in live tournament winnings, took home $1.087 million for his runner-up result, and Linde was crowned champion.

“I’m pretty much going to keep doing the same thing I’ve been doing,” Linde said when asked where he takes his poker career from here. “I’m a big believer in the amount of money that I have doesn’t really dictate the games that I should be playing. I’ll have some more action of myself in tournaments rather than selling more. I’m not going to start playing super high rollers or anything. I’ll just play the cash games I normally play here (in Las Vegas) and play tournaments. I’m pretty happy with my life at the moment, as far as poker. I play fairly high stakes normally anyway, and I don’t really need to go battle against my friends in the 25Ks and 100Ks who I know are slightly better than me or a lot better than me. At one point, maybe I will, but for now, I just want to keep improving, use this to make my life more comfortable, and hopefully make it so that I feel more confident and can just play my A-game more consistently.”

With the victory, Linde earned a $15,000 seat into the season-ending WPT Tournament of Champions. He also picked up 1,400 points in the Hublot WPT Player of the Year race, although that only puts him in third behind Tony Ruberto’s 1,850 points and Liu’s 1,550 points.

Next up on the WPT Main Tour is the $10,000 buy-in WPT Gardens Poker Championship in January at the Gardens Casino in Southern California. That tournament runs January 12-16, 2019.