For 22-year old poker player Ethan Yau, the situation he’s referring to is being a newly crowned World Series of Poker gold bracelet winner. In the early hours of Monday morning, Yau topped the 2,502-entry field of WSOP Event #26 ($500 NLHE Grande Finale) to claim the $164,494 first-place prize and his first gold bracelet. And, he did it all while streaming on YouTube to an audience of thousands.

Yau is the first to admit, he’s not a tournament pro. For the past couple of years, Yau has been focused on playing live NLHE cash games and doing it all in front of the camera for his rapidly growing YouTube channel, RampagePoker. When his summer plans of flying to Las Vegas for the first time to play at the WSOP were derailed due to the coronoavirus, he pivoted to picking a weekend in New Jersey to get his first taste of the World Series of Poker by playing online.

“One of the cool experiences for me is getting to play in a WSOP event for the first time in my life because I’m twenty-two,” Yau said. “I wasn’t able to go to Vegas last year and I had planned to go this summer. Unfortunately, that never worked out. So I just had the intention of trying to have a good time and also put out an entertaining stream for the people that watch my videos.”

What started out simply as possible content for Yau’s 22.5K subscribers, turned into something much more. Sunday night turned into Monday morning and Yau found himself progressing deeper in the tournament. His viewer count began to soar and those viewers were there to cheer him on. And maybe even guide him a little here and there.

“The stream played a really huge part in helping me out because, for one, I’m obviously new to the game. So I’m very unfamiliar with different pros. I knew that the WSOP events were very pro heavy and super tough,” he said. “So the stream helped me navigate through the tournament where if there was someone that they knew, they’d tell me. They’d say ‘this player to your right is a huge, crazy pro…super, super good so try to avoid them even though you have position on them.’”

“It was really cool to have that instantaneous feedback to help me navigate through the tournament. If I ever made a mistake…I would know immediately. So just being able to kind of tighten up and play a little bit better, getting that feedback and knowing what mistakes I was making. That was huge to kind of prevent and prolong the eventual punt that I assumed I would make.” 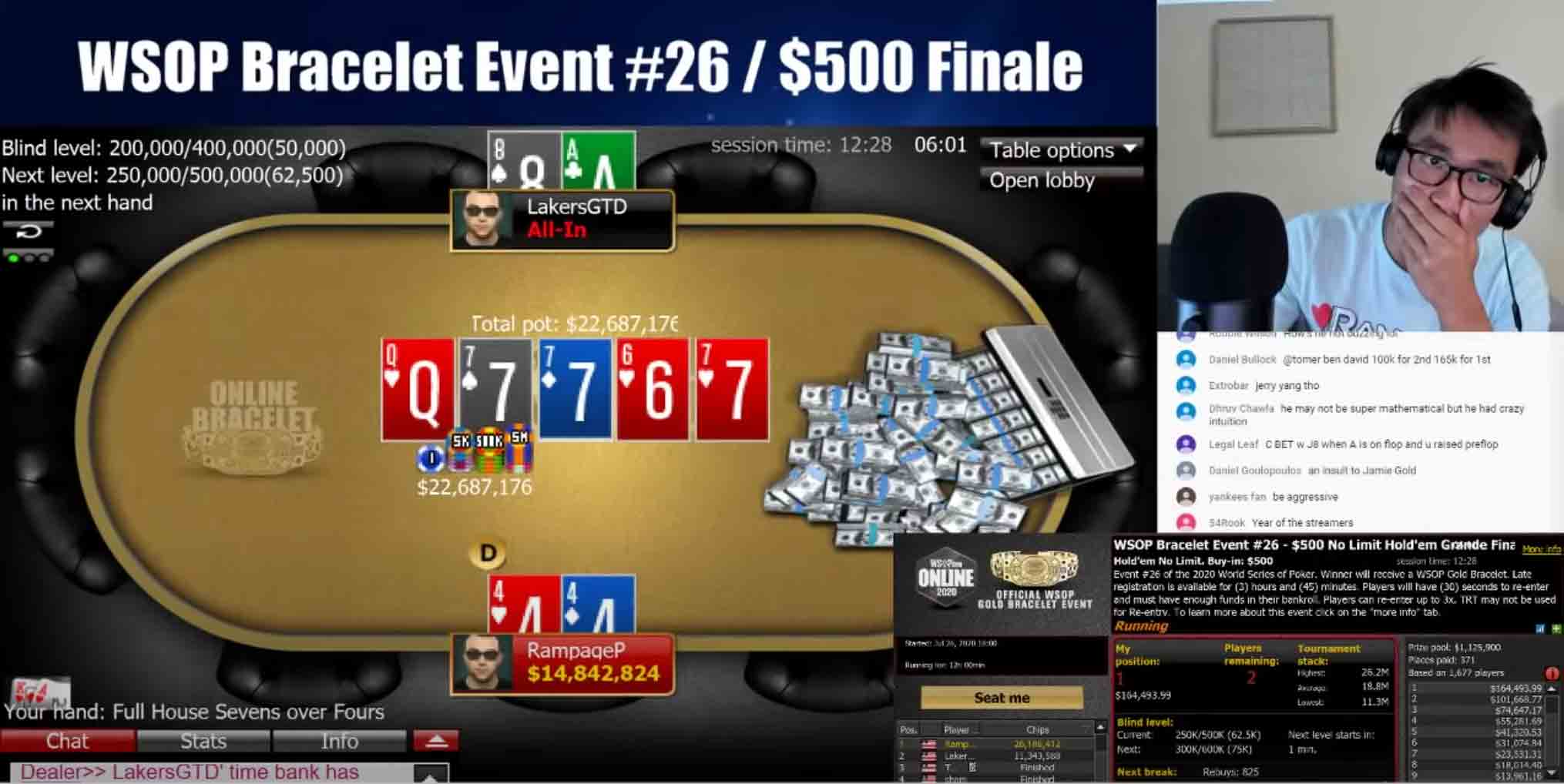 Yau has always been open to audience feedback when it comes to poker. That’s part of what makes his WSOP victory extra special, as it was his audience that drove him to compete at higher levels in the first place.

Unlike a generation of online grinders that picked up poker through a family home game or by watching Moneymaker on ESPN, Yau stumbled into the game just two years ago. As a student at UMass, he first gave playing blackjack a serious shot. But after losing “a decent chunk of change as a college student” a friend helped him switched over to poker.

“In the first thirty minutes, I lost five hundred dollars. I lost two buy-ins in basically thirty minutes…terrible,” he recalled.”So I walked away from that experience thinking ‘alright I am going to try and get good at this somehow or never play again.’”

Yau went to YouTube and searched for ways to get better at poker. He quickly found videos from some of the top poker vloggers like Andrew Neeme, Brad Owen, Johnny Moreno, and Jaman Burton. He absorbed the content and not only learned more about poker by watching them, but he became inspired by them.

“I had some experience making YouTube videos before. I used to make gaming videos,” he said. “So I was familiar with editing videos and posting a schedule. So I thought why not just go for it? Try. Because I needed to find a way to learn anyway.”

So Yau followed in the vloggers footsteps and created his first poker video in January 2018.

“It was one of my first five sessions playing live ever,” he said. “I was still unsure of how the button moved.”

What he lacked in poker knowledge at the time he more than made up for with drive. He kept an open mind and responded quickly to those who watched what he was creating.

“I got a lot of helpful feedback and a lot of real criticism, which I needed. I kept making videos, I kept learning from the YouTube comments. And that was honestly one of the main ways I’ve learned, just getting feedback from random people online. And it was very harsh, but it was what I needed to hear to learn. Over time, I have improved along the way.”

Not only has he improved as a player along the way but his channel has flourished as well. Over the past two years, Yau has created over 170 poker vlogs some of which have upwards of 80,000 views.

Yau’s gold bracelet weekend in New Jersey has come to an end but his YouTube exploits are just beginning. He says he has plans to expand into blackjack and golfing channels while keeping his focus on RampagePoker. When the coast is clear he’ll be traveling to poker rooms across the U.S., and possibly internationally, to give his vlogs “a different flavor.”

Yau’s journey through poker has been helped by the advice of his audience but as he drives home after winning a WSOP gold bracelet he also has some feedback for those who watched him do it.