Originally scheduled to take place in August, the 2020 PokerStars Players No Limit Hold’em Championship (PSPC) has been postponed due to the coronavirus pandemic. The announcement was made by PokerStars on Friday, May 22, 2020.

PSPC 2020 was scheduled to take place at Casino Barcelona from August 20-24, 2020, during the European Poker Tour Barcelona time slot. The event has been postponed until 2021, as has EPT Barcelona. No exact dates have been issued, but the event is still planned to take place in Barcelona, Spain.

How Much Does It Cost To Enter PSPC?

The PSPC buy-in is priced at €22,500, which is approximately $25,000 and very much equivalent to the price tag that came with the first PSPC that was held at the 2019 PokerStars Caribbean Adventure festival.

As was done for the first PSPC, PokerStars will be hosting many different ways for players to win their way to PSPC for less than €22,500, including bringing back the popular Platinum Pass promotion.

What Is a Platinum Pass?

For PSPC, a Platinum Pass includes the following:

How To Win a Platinum Pass 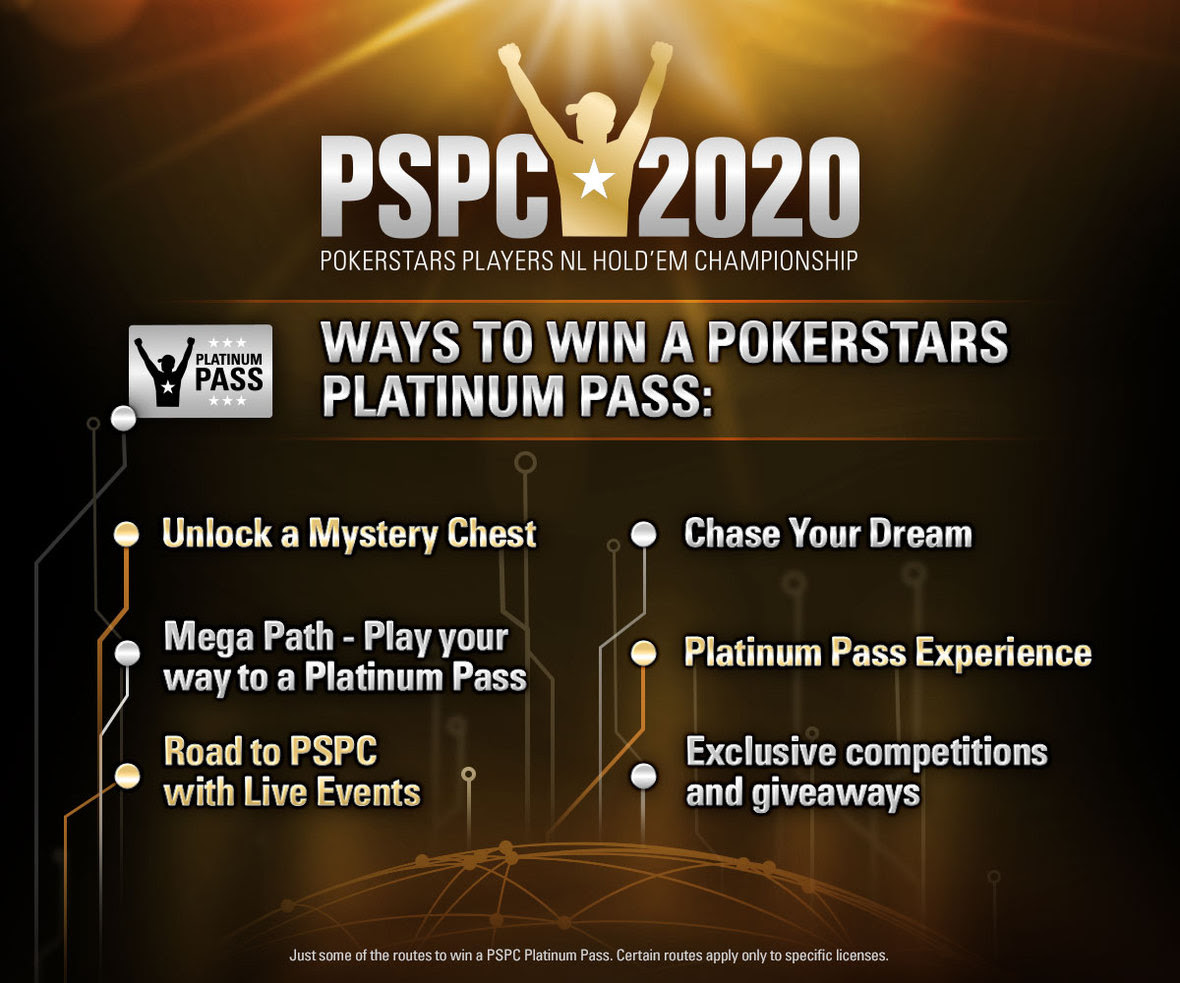 Platinum Passes will be given out in numerous ways. If you’re not looking to spend the €22,500 (approx. $25,000) to buy one, you’ll have plenty of opportunities to get your hands on one for much cheaper or even for free.

Players have chances to win Platinum Passes through PokerStars’ live events, special promotions and contests on social media, Twitch promotions, playing on PokerStars, and more. As we saw with the first PSPC, PokerStars is more than willing to get creative with how it awards Platinum Passes.

How Many Platinum Pass Winners Are There?

What About New Jersey and Pennsylvania?

PokerStars has activity in both New Jersey and Pennsylvania. In New Jersey, the site launched in March 2016 and has been going strong ever since. Platinum Passes were given out in the Garden State for the first edition of PSPC through PokerStarsNJ.com, and that will likely be the case for future PSPC festivals.

It also wouldn’t be out of the question to see a Moneymaker’s Road To PSPC stop appear in New Jersey and Pennsylvania. Moneymaker regularly makes his way to regulated states to play some of the bigger online series that PokerStars hosts, and we all know how successful the first run of the Moneymaker-PSPC promotion was.

What Other Events Are Part of the PSPC Festival?

The €22,500 buy-in PSPC event wasn’t the only tournament planned as part of the highly anticipated Barcelona festival. In fact, it’s PSPC that is part of the greater EPT Barcelona schedule.

Those are just three of the big events that were scheduled to take place as part of the EPT Barcelona festival. Although EPT Barcelona has also been postponed until 2021, we can expect to see the same sort of schedule in 2021, where there are EPT Barcelona events all around PSPC to create an enormous festival.

To give you an idea of how successful EPT Barcelona has been, let’s take a look at the last editions of those three events that were mentioned.

The EPT Barcelona €1,100 National Event enjoyed record-breaking success in 2019, attracting a field of 4,682 entries and generating a prize pool north of €4.5 million. Markku ‘markovitsus’ Koplimaa, who won the PocketFives July 2019 PLB title, emerged victorious in the event for €585,500.

The popular EPT Barcelona €100,000 Super High Roller always seems to attract poker’s best of the best and it’s enormous six-figure buy-in always lends itself to huge scores. In 2019, it was Sergi Reixach taking this event’s title and first-place prize of €1.816 million. The event drew 64 entries.

The EPT Barcelona €5,300 Main Event is always one that is not to be missed, and in 2019 it attracted a giant field of 1,988 entries to become the largest European Poker Tour main event in history. Sweden’s Simon Brandstrom took top honors and the €1.253 million top prize.

PSPC in Barcelona will be the second-ever PokerStars Players Championship. The first was held as part of the 2019 PokerStars Caribbean Adventure festival. It had a $25,000 buy-in and became the largest $25,000 buy-in tournament of all time. The tournament attracted 1,039 entries and generated a $26.455 million prize pool.