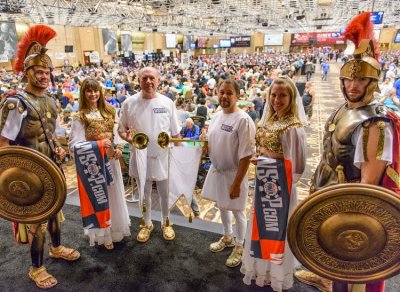 It took until Sunday night, but the final numbers for the 2015 World Series of Poker Colossusare in. The result was as expected: the largest-field live poker tournament in history. This author said from the get-go that the Colossus, which had a $565 buy-in, would fetch over 20,000 entrants and was dead on. The final attendance figure: 22,374. Who says poker is dying?

The prize pool, which was guaranteed to be at least $5 million, ended up passing $11.1 million, which means the eventual winner will get $638,000. A total of 2,241 players will finish in the money, the most ever to cash in a live tournament.

WSOP Executive Director Ty Stewart commented in a press release, “We want to thank everyone who traveled from near and far to be part of this historic event, particularly the first-timers… We love to bring poker enthusiasts together and help build positive momentum for the game. I also want to acknowledge the thousands of event staff and volunteers who rallied together to make this weekend possible. In putting the WSOP together, we are lucky to lean on many great people whose passion goes beyond a paycheck.”

Flight 5C was the busiest at 6,283 entrants, while Flight A had 5,173, Flight B had 5,029, and Flight D had 5,889. Each flight had several late seating waves that helped push the attendance figures to record levels.

According to WSOP officials, the Colossus broke a number of records:

Sunday marked Day 2 of the Colossus. A total of 2,300 entrants remained when this author sat down to write this article. Bulgaria’s Yuliyan Kolev was the leader at almost 200,000 in chips. Each player began with a stack of 5,000.

Other fun facts: A total of 982 dealers were needed for the event, which saw tables spread out across the Rio from Buzio’s to the Poker Kitchen. There were 4,480 decks of cards needed along with 335,610 unique poker chips. The top prize represents an ROI of 1,130x.