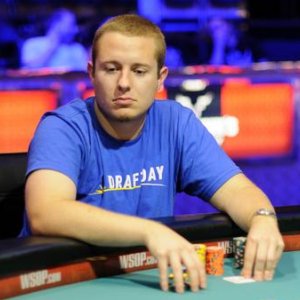 Brian Stinger885Hastings (pictured) was formerly a staple of the highest stakes online poker games on the planet. He faced off against some of poker’s brightest minds on the cash game felts and has $1.3 million in career live tournament scores, according to the Hendon Mob. Now, he’s a regular in daily fantasy sports games on sites like FanDueland DraftKings, which take US players.

PocketFives: Thank you for joining us. How does your typical week go? What are you playing?

Brian Hastings: Especially since basketball started, I play about every day. Sunday and Thursday, I am entering football games. I am pretty much doing something every day. For a few weeks, I was doing 100 entries into the Millionaire Maker on DraftKings, so that took a little while. I’ve been ramping it down recently and only doing 20. When I was doing 100, I was making a spreadsheet to prepare and found all the players I wanted to use and tracked my exposure. I would say some weeks I spent 20 hours a week on it.

PocketFives: Walk us through what it takes to create 100 lineups.

Brian Hastings: I try to diversify quite a bit. The spreadsheet is to track exposure on how much of each player I have. I’ll identify what QBs I want to use and make a bunch of teams around them. I’ll add that up to 100 and start making all my Peyton Manning teams at once, for example, and then try to diversify among them.

PocketFives: What resources do you use when setting your lineups?

Brian Hastings: One simple resource is FantasyPros. They have rankings and projections of a bunch of experts on one site. I tend to believe in the wisdom of the crowd approach. I subscribe to FootballGuys too.

PocketFives: How do you split your time and money between DraftKings and FanDuel?

Brian Hastings: I usually try to play a decent amount on both sites. It depends on how big the games are and how much value is in them. On DraftKings, when they’re running the Millionaire Maker, they’ve been overlaying it huge. FanDuel hasn’t had a lot of overlays, but there are quite a few recreational players on that site.

PocketFives: What have you been doing poker-wise?

Brian Hastings: Mostly just playing live. I’m not playing as much as I used to. I still play a decent bit, though. I’m living in Florida and there’s a decent amount that goes on here. The Hard Rock has big series every year. There are some cash games here. I miss poker in its previous state. It’s a tougher game than it used to be, but I still enjoy it. I can still make money doing it, but it’s not nearly as profitable.

PocketFives: Do poker players have any sort of advantage in daily fantasy sports?

Brian Hastings: Yes, poker players have some built-in advantages. The structure of the games is similar to poker. Poker players have an inherent understanding of things like EV and variance, which are crucial in DFS. Part of it is that it’s natural for poker players in general because the average person might be skeptical about putting money online. It’s right up your alley being able to bet money online. It’s incredible how much FanDuel and DraftKings have been advertising too. You can’t watch “Sunday NFL Countdown” without seeing a FanDuel or DraftKings commercial.

If you don’t have a FanDuel account, sign up through PocketFives by clicking hereand get a generous deposit bonus plus access to 5,000 one-day leagues each week! Plus, play in this week’s Sunday Million, which has a $2 million prize pool. DraftKingshas a special Millionaire Maker running for Week 15.