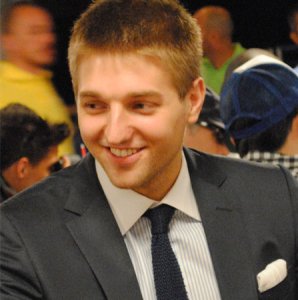 This author met longtime PocketFiver and World Poker Tour host Tony Bond18Dunst (pictured) in Los Angeles during the American Poker Awards cocktail hour. When asked what else he was doing besides producing content for WPT broadcasts, Dunst quickly responded, “Playing daily fantasy sports,” or DFS. We caught up with him during Monday’s WPT Championship dinner break in Atlantic City.

PocketFives: Thank you for joining us. How did you get into DFS originally?

Tony DunstL I work for the WPT and we have a sponsorship deal with DraftKings that was originally arranged by Jonathan FatalError Aguiar. When he came on and started doing streams with me and described how smoothly the money flowed into the DFS economy, I thought it would be good to get into it. I really got into it and love sports, so it was a great match for me.

PocketFives: There are a number of DFS sites out there, including DraftKings, FanDuel, and FantasyFeud. Do you primarily play on DraftKings?

Tony Dunst: I did almost entirely DraftKings originally. I am doing mostly tournaments and some cash games. I am doing a whole bunch of sports like baseball, college basketball, pro basketball, and football. I enjoy watching them all and learning about each sport. Now I just need to get into hockey.

PocketFives: How do you start being competent in other sports besides what you know?

Tony Dunst: It’s mostly doing your research. You can look at projections, read people’s picks, and check out articles. You can take it all in.

Tony Dunst: I had a weekend when I entered $2,000 worth of contests and won just under $150,000. That was the first weekend of the NFL playoffs. There was a $300 buy-in tournament that had $100,000 guaranteed up top. I had a lineup that won that tournament and I did well in other things too. I had been losing all season and had a big score right at the end.

PocketFives: How do you have enough time to juggle WPT, DFS, and everything else you do?

Tony Dunst: When I’m away from the WPT, my schedule isn’t that demanding. I don’t play a ton of poker. I write and read a lot, so I am free to concentrate on DFS and other things. I’ve been working on a book for a while, but I keep ditching everything I have and starting over. I am on my fifth attempt now. The book is about myself and my friends playing online poker and our experiences. Everyone has been willing to let me portray them as I remember them and I think it’ll be really well-received.

PocketFives: Give us some basic daily fantasy baseball strategy.

Tony Dunst: Baseball is a strange game. It’s about picking the right stack. You’re trying to find stacks not owned by a lot of the field that will still score a lot of runs. It’s finding teams likely to perform well, but not likely to be owned by that many people. For example, there will be a player whom everyone will be on one night and you need to look for a player a half-a-step down whose ownership will not be as significant. That’s the guy you need to go with in GPPs, whereas the highly owned guy is who you go with in cash games. 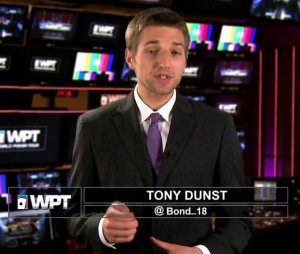 PocketFives: Will we be seeing you on the WPT next season?

Tony Dunst: I’m signed through next year. I’m enjoying it. The show seems to be going well, according to what the producers have told me.

PocketFives: Are you ready for the WSOP?

Tony Dunst: It works out nicely since our season ends with this event and then we have a period during the summer where not much is happening. I am looking forward to hanging out with my friends. I enjoy the atmosphere of coming home to hang out with poker players, talk hands, and sit outside enjoying that nice Vegas weather.

PocketFives: What do you do outside of poker and DFS?

Tony Dunst: I work out. I lift weights and play tennis. I’m a big exercise proponent. I read. I watch “Jeopardy.” I watch “Game of Thrones” and John Oliver’s new show on HBO. I’m not terribly social when I’m at home; I’m more of a workaholic. When I’m on the road with the WPT, I’m a lot more social.

PocketFives: What did you think of Alex Jacob’s recent six-day run on “Jeopardy”?

Tony Dunst: Alex did a bunch of the funny stuff on “Jeopardy” that I’ve always wanted to do. He’s a very talented guy. I remember playing with him in poker games. He’s very smart and a great player.

If you want to give DFS a try, sign up forDraftKings, FanDuel,and FantasyFeud through PocketFives’ links, make a deposit, and play in a real money game to get a free PocketFives baseball hat! US players are welcome.