GlobalPoker.com, part of VGW Holdings, have created a sweepstakes business model that allows players from all across the US to withdraw any winnings via PayPal.

Players signing up for GlobalPoker.com today receive 10,000 Gold Coins, a virtual currency that has no cash value, and 2 free $weeps Cash that they can begin using right away with no strings attached.

If players want to boost up their bankroll or lose their initial 10,000 Gold Coins they will need to purchase more Gold Coins if they want to continue playing.

As an added bonus, with each purchase of Gold Coins, players receive “$weeps Cash” – a second virtual currency used in the Global Poker ecosystem. If players choose to play with $weeps Cash they can use that currency to buy-in to other ring games, sit-n-gos or tournaments and cash out any winnings via PayPal.

Using the sweepstakes model is nothing new in the world of online poker. ClubWPT.com and TexasHoldem.com are just two examples of companies that have followed this model. Global Poker is the first to allow winnings to be withdrawn via PayPal.

SIGN-UP FOR GLOBALPOKER.COM NOW AND GET 2 $WEEPS CASH FOR FREE

Founded in 2010 by Laurence Escalante, VGW Holdings Limited has also had similar success with this model on the social casino side with the wildly popular Facebook game ChumbaCasino.com. In late 2016, the company raised $16 million to facilitate a wide scale expansion into the world of poker.

“We are all keen poker players and we are in for the long haul,” Escalante said “We believe Global Poker is the future of online poker in the U.S.”

The current product offering includes a wide array of ring games and tournaments.

The daily tournament schedule include events with buy-ins as low as 1.10 $weeps Cash and guarantees as high as 1,500 $weeps Cash. During their March Madness 2017 Series promotion Global Poker also running tournaments with GTD’s ranging from 500 $weeps Cash all the way up to 25,000 $weeps Cash with a very affordable 50 $weeps Cash buy in. There’s also a number of daily freerolls for players who meet certain criteria including Gold Coin purchases and number of flops seen. Ring games are available for both No Limit Hold’em and Pot Limit Omaha with stakes running between 0.01/0.02 and 2/4. Sit-n-go action starts at 0.55.

The software is built in HTML5 and allows players to play on nearly any platform including PC, Mac, iPads and most mobile phones.

The $weeps Cash product is currently only available to American and Canadian players while the Gold Coins games are open to players around the world. The company plans to open up to new markets soon. 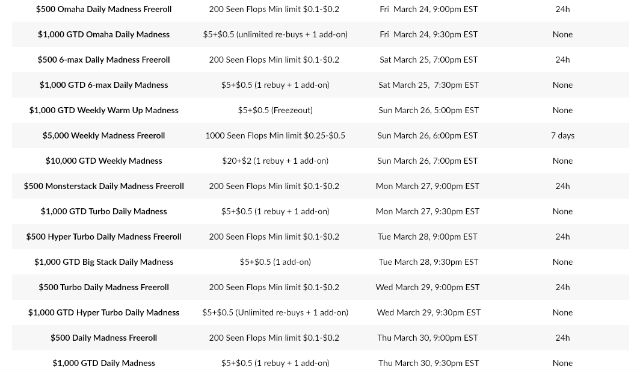 SIGN-UP FOR GLOBALPOKER.COM NOW AND GET 2 $WEEPS CASH FOR FREE