On the heels of an arrest warrantfiled against him in a Las Vegas court, friends and acquaintances of embattled poker player Bryan Micon (pictured) are supporting a GoFundMe account that Micon started in an attempt to raise money for his legal defense.

Started on Monday, the “Bryan Micon Legal Defense Fund” is looking to raise $100,000, which might be a mere pittance in what could be a lengthy case. In the body of the account information, the verbiage appears to have been written by Micon. He said, “I have committed no wrongdoing and have retained the legal services of Chesnoff & Schonfeld.”

Micon admitted, however, that “the price for representation will quickly deplete my funds and I am asking for donations from anyone who feels like helping me.” Micon finished off his statement on his GoFundMe page by saying, “As a husband, father of a 2-year old girl, and outspoken Bitcoin advocate, I desire nothing more than to continue to be with my wife, raise my daughter, and continue to build layers on top of the Bitcoin protocol. The state of Nevada desires to take that away from me… Please help me fight.”

In the less than 24 hours that the site has been active, there has been $1,940 donated to the Micon cause by 22 people. Several people have donated anonymously, including a $1,000 donation, and several prominent names have decided to stand beside Micon during his difficulties.

By far the largest donation by an attributable source is “Hollywood Dave” Stann, the former blackjack champion and poker professional, who has donated $250. On GoFundMe, Stann stated, “You had me at ‘math does not bow to guns,'” and remarked over Twitter, “Help strike a blow against government overreach. This case has ‘Supreme Court landmark decision’ written all over it.”

Several other notables have stepped up in support of Micon. Online player Gary Feldman has donated $100, poker journalist Lee Davy pitched in $50, and two other professional players offered their financial support. 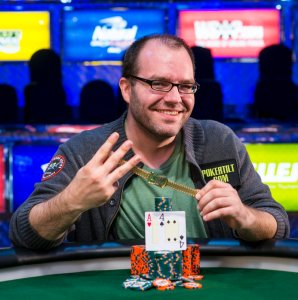 In putting up $100, three-time World Series of Poker bracelet winner Dutch Boyd (pictured) said on the GoFundMe page, “We want to see you back in Vegas bracelet hunting… Good luck,” and added over Facebook, “How is it that [Russ] Hamilton is golfing in Vegas while Micon is facing ten years?” Also spotting $100, Randy Dorfman added, “Truly disgusting they chose Bryan to go after, while Full Tilt, Lederer, and crew basically got away with murder.”

In analyzing the case, it could go either way depending on how strictly the charges are followed. Charging Micon with one count of operating an unlicensed interactive gaming system, the Nevada Attorney General’s office could have a solid case on that front. It is illegal in the state of Nevada to offer any type of gaming unless it has been licensed by the Nevada Gaming Control Board.

As this case is about online gaming and, in particular, poker, the Attorney General’s office is looking to enforce the laws on the books and protect the online poker industry of Nevada, of which it could be construed that Micon’s SealsWithClubs online poker site was poaching players from.

Advocates for Micon have raised the issue thatSealsWithClubs wasn’t dealing in any financials but using Bitcoin for its operations. The usage of Bitcoin as currency is an extremely gray area, as several governments have questioned its legitimacy. It has also brought about several arrests and Bitcoin seizures, including the now-infamous Silk Road case from 2013 that allegedly trafficked in illegal drugs and other materials.

If found guilty of the charge, Micon, who is currently in Antigua, a country not known for extraditing online gaming figures to the United States (allegedly Scott Tom of Absolute Poker and Bodog founder Calvin Ayre live on the island), could be sentenced to up to 10 years in prison and face a $50,000 fine.