According to the deal, GVC would pay 110 pence per share, representing an 8.5% premium to its stock price at the time of this article’s publication. The Isle of Man-based GVC is an iGaming company that specializes in sports betting and controls brands like Sportingbet, Casino Club, and Betboo.

“Based on our experience with the successful Sportingbet acquisition and restructuring, we believe that the potential combination of GVC and bwin.party would result in substantial financial and operating synergies and represent an excellent opportunity for both GVC and bwin.party shareholders,” said GVC Chief Executive Kenneth Alexander in a release.

bwin.party was first revealed to be up for sale in November when it released a statement to the media amid whispers of an acquisition. “The Board of bwin.party confirms that it has entered into preliminary discussions with a number of interested partiesregarding a variety of potential business combinations,” the company said. At the time, analysts speculated that the firm was looking to strike a deal with Canadian holding company Intertain or the gambling software developer Playtech. 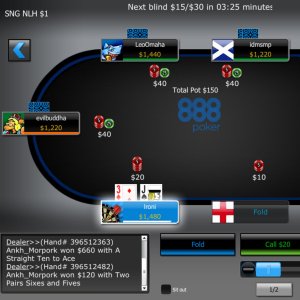 In May, Gibraltar-based 888 Holdings threw its hat into the ring and confirmed that it had made an undisclosed offer to take over the company.

In a release on Wednesday, GVC noted that its bid to purchase bwin.party was backed by PokerStars‘ parent company, Amaya Gaming. Sports betting represents more than half of bwin.party’s revenue and is a business that Amaya has recently tried to tap into with its own product. With its rival out of the way, the company could quickly increase its market share substantially.

bwin.party’s $1.4 billion offer could start a bidding war with competitor 888, the parent company of 888 Poker.

“I don’t think 110 pence is a price that knocks 888 out of the process if they really wanted it, but equally they had ample time to match or better that bid,” Peel Hunt analyst Nick Batram told Reuters. A merger between two of its rivals is a troubling scenario for 888, a partnership that Batram calls a “serious competitor” to the company. 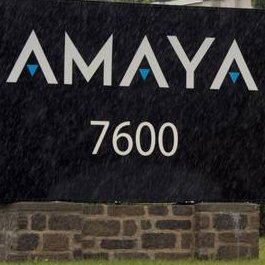 A deal with Amaya Gaming would further consolidate the Canadian company’s online gambling reach, which already includes PokerStars and Full Tilt Poker, and would give the gaming giant an even stronger foothold in the industry.

A stake in bwin.party would also give Amaya instant access to the regulated online gambling market in the US, where bwin.party operates an iGaming network in New Jersey. PokerStars has fought tooth and nail to be allowed entry back into the US, but has faced pushback by potential competitors.

At the time of the acquisition announcement, bwin.party shares dipped slightly before surging from 97 to 101 pence, a 4% increase. GVC’s stock also rose from news of the deal, from 440 to 451 pence, around 2.5%.

bwin.party was created in 2011 when bwin Interactive Entertainment joined forces with Party Gaming to offer a variety of online gambling products. In 2014, the company took in revenues of about $675 million. It employs more than 2,300 people across the globe and operates PartyPoker.

Since the two companies merged, bwin.party has struggled with disappointing revenue year after year. Last May, activist investor Jason Ader bought a controlling stake in the company and planned to overhaul operations and trim members from its Board of Directors.