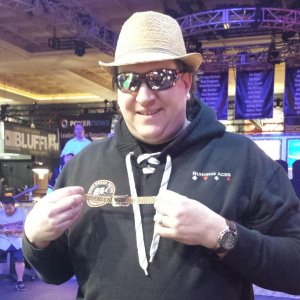 Earlier this week, longtime PocketFiver and all-around good guy Chris FoxWallace (pictured) won a $10,000 HORSE event at the World Series of Poker. Considered one of the most prestigious bracelets up for grabs this year, the $10,000 HORSE event drew exactly 200 entrants and featured a litany of brand name pros.

“I played online and got tired of No Limit Hold’em,” Wallace told PocketFives in an exclusive interview on Thursday from Las Vegas. “I started with Limit Hold’em and then played No Limit. After my first million hands of No Limit online, I got tired of it. I wanted to learn new games and have fun. I love Mixed Games now. They keep me interested because I get to play a new game constantly. My win rate in Mixed Games online was much higher than anyone could have achieved in Limit Hold’em.”

Wallace Tweeted when four players remained, “$160K locked up. Happy investors tonight!” When asked what percentage of the $10K he sold, his response was “more than half,” and added, “It was pretty easy to sell. I put a $50,000 package for the WSOP up and it sold out pretty quickly.”

Heads-up, Wallace went toe-to-toe with another longtime PocketFiver, Randy mavsrule3Ohel, who began the final day of play as the chip leader. Wallace said of Ohel’s play, “I think he played really well. He’s a strong player. He was put in a couple of tough spots at the end.” Ohel won a bracelet in 2012 in Triple Draw. 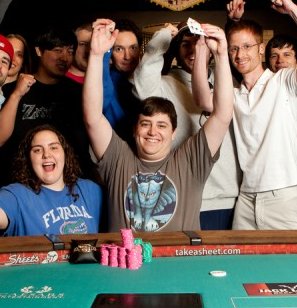 Complicating matters for Ohel(pictured) and company was Wallace’s image. “I was one of the more aggressive players at the table,” Fox said, “so it was hard for Randy to make big folds because of the history we had and the way the tournament had played out.” As a result, the Minnesota resident won his first bracelet at his first WSOP final table.

We spoke to Fox around 8:00am in Las Vegas and the bracelet winner was bright-eyed and awake. He said his sleep schedule has been turned upside down over the last few days and, to celebrate his big win, he hit up the bars in Sin City. “Some friends came down and the people on my rail came with me,” Wallace told us. “I knew I wasn’t going to go to sleep anytime soon, so we went out and partied until 9:00am that day.”

The field of the $10,000 HORSE event was a mix of the old guard and new poker superstars. Daniel Negreanu, Greg Mueller, Calvin cal42688 Anderson, and Bill Chen were among the 24 players who cashed, leading Wallace to note, “The common ground of the field was that almost everyone was smart and had played long enough to learn games well. It’s probably the toughest field I’ve ever played in next to the $10K Razz field a few days before.”

He joked, “Someone sent me a list of players who made Day 2 of the HORSE event and the only name I didn’t recognize was my own.”

Finally, don’t expect Wallace to rest on his laurels for the rest of the WSOP. Instead, he plans to enter the $10K Stud event, the Dealer’s Choice tournament, and other events he had already planned to. The only change appears to be skipping the $1,500 HORSE tournament that starts on Thursday due to several radio appearances and a bracelet ceremony in the afternoon.

PocketFivers have scooped 10 WSOP bracelets this year and generated $8.1 million in winnings from 51 final table appearances, an average of $158,000 apiece. The record for bracelets won by the PocketFives community in a year is 23, set in 2011. This year, PocketFivers are on pace for 28. Real Gaming, a regulated online poker site in Nevada, sponsors our WSOP coverage.

Congrats again to Chris Fox Wallace on his first gold bracelet! He has been one of our favorites throughout the years and an integral part of the success of our community.