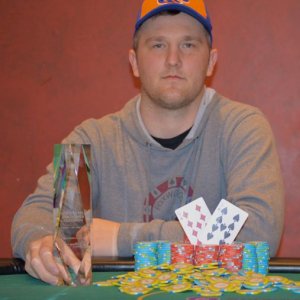 The Borgata Fall Poker Open is currently taking place in Atlantic City at the Borgata Hotel and Spa through November 21. PocketFives caught up with one of its own members and Event #4 champion, Jake jtsnakesPerry (pictured, image courtesy of Borgata blog), which was a $560 buy-in two-day event that attracted 207 entrants for a prize pool of $103,500. Visit PocketFives’ New Jersey poker community for the latest news and discussion from New Jersey players.

As of late, Perry has been on a tear on the live poker scene, as back in October, he finished second in the Parx Big Stax Main Event for his largest live score of $68,501, bringing him to over $100,000 in winnings in less than a month. Here were the final results of this tournament as reported by Borgata:

PocketFives: Congrats on your win in Event #4 the Borgata Fall Poker Open for $28,207. Tell us how you are feeling and what this win means to you.

Jake Perry: I was more relieved than anything. Shipping a live tournament is something that has avoided me for a long time. At the end of the day, it is just money and it is time to go back to work the next day. What it really meant to me: I should not have played the next day because I punted a decent stack because I was tired of poker from the day before.

PocketFives: Back in October, you finished second in the Parx Big Stax Main Event for $68,501. Which tournament field did you feel was tougher to navigate?

Jake Perry: Parx was piles tougher. If you go back to the final 40 of the Parx event, it was a sick, sick field. Looking at Borgata, I only know a couple of names of the people that cashed. Like all tournaments, though, there were different challenges.

PocketFives: Do any hands from the Borgata Fall Poker Open win stick out?

Jake Perry: There were a couple of big swing hands at the final table. I got in 9-9 vs A-To to double up about eight-handed, which put me just below average but was a huge confidence-builder. Seven-handed, I got another double with A-J vs A-T, which put me in the virtual chip lead. One hand sticks out from Level 4 of Day 1, actually. I got A-A and a super-agro guy did not pile in A-K for any more money. That was the second worst beat I took the whole tournament.

Jake Perry: Not really. I may take a vacation in January, but only if it does not conflict with anything I want to play. My real plan is to continue putting more money on top of that money. I would like to repeat this process as often as possible.

PocketFives: What have your friends and family said about the win?

Jake Perry: The standard congratulations. I have made consistent money in this game for a long time, so I can’t really say anyone was shocked.

PocketFives: To what do you attribute your current success in the live arena?

Jake Perry: Live or online, my game has hit another level thanks to Mike Gags30Gagliano and Mike Lav519 Lavenberg. Opening things up and realizing that I am much better post-flop than I thought I was has helped and with the knowledge I have of that, I have been able to play a slightly more aggressive pre-flop style. And obviously I am going to run better with fedora magic on the rail.