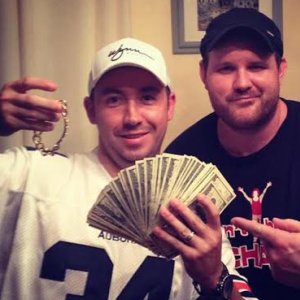 Riverside, New Jersey’s Anthony F. Cicali III (eatahoagieon PocketFives, pictured) juggles many hats besides playing poker part-time. He is a police officer, entrepreneur, and a family man. Cicali began playing poker in the fifth grade and continued to gain experience through his college years. With over $45,000 in tracked online cashes, some of his notable accomplishments in New Jersey include a win in the PartyPoker/Borgata Poker $10,000 Guarantee for $3,010 and two wins in the WSOP $10,000 Guarantee for a total of $5,723.

PocketFives: When did you start playing poker?

Anthony F. Cicali III: The first hand I can remember was in the back of Sister Pierre’s fifth grade class. It was one of those last days of school where you don’t really do anything but goof around and we were playing Five Card Draw. I think I won someone’s CD player in that game.

Flash-forward to the Moneymaker Boom and I was attending Stockton College, which is 10 minutes from Atlantic City. Coincidentally, Chris Moneymaker and I share the same national fraternity, Pi Kappa Phi, so the Moneymaker effect was felt even stronger among my brothers. We used to hold weekly 40-man, $10 tournaments in a college dorm meant for about six people. I’ve been playing ever since.

Anthony F. Cicali III: My time online is probably about half of what the players on my level are grinding. I work a full-time job as a police officer and also own a side business. On top of that, I’m married with two young kids, so my online time is limited. I treat it as a part-time job, though, and try to put in at least 20 hours a week.

The one good thing about not playing as much as some of these other grinders is that I really look forward to playing. A lot of regulars tell me they get burned out. I’m kind of the opposite. I thoroughly enjoy it and don’t worry about the stresses of paying my mortgage or finances with poker money. So, I’m fortunate in that regard.

PocketFives: How do you pick what cash games or tournaments to play?

Anthony F. Cicali III: My New Year’s resolution this year was to turn $100 into $10,000. I followed and modified Chris Ferguson’s old plan, when he took the “Full Tilt Challenge” and started with freerolls and turned it into $20,000 in 18 months. I made some changes to his plan, but kept very strict guidelines this year. I started out grinding $1 tournaments in January and reached my goal last month. So, the tournaments are based on what my bankroll allows and that determines what I play.

Anthony F. Cicali III: I play WSOP, 888, and Borgata/Party routinely. I don’t think I generally have a favorite, but I’ve had the most success on WSOP thus far.

Anthony F. Cicali III: I had some nice wins this year including three $10,000 Guaranteed events, but the win that was the most memorable was getting Jay-Z suite tickets through the PartyPoker Dream Series. My friend Erich and I went and got the full VIP treatment. It was probably one of the best concerts I’ve been to in a few years. Winning money has been nice, but some players forget there is life outside of the felt. So, I think it’s good when sites offer prizes outside the casino.

PocketFives: Is there anyone or anything that helped change how you approach the game?

Anthony F. Cicali III: I’ve never had a coach or a mentor. I’ve learned the hard way, but kept pushing forward. Reading has been the key to improving my game. I now have about 100 poker books in my arsenal and watch a lot of online training videos.

The moment you think you are too good or lack the ability to try to improve, you’re probably toast. This game has evolved so much in such a short period of time and you need to keep studying and playing to stay in tune. I’ve greatly transformed my game by putting in the effort and have completely turned it around.

I also have to thank my wife. She truly has been very supportive and I really believe without a good support system, I wouldn’t have been able to accomplish the wins I did this year.

PocketFives: Is there anything you would like to add?

Anthony F. Cicali III: This year, I was fortunate enough to sign on as an executive producer in an independent film called “Deadly Gamble” by director Mario Cerrito. In this horror/thriller, I play a small role as a poker player in a few scenes. We just found out that the movie was picked up for major distribution and will be released on iTunes, On Demand, Netflix, etc. around February 2015. So, I’m looking forward to that. Maybe a little PocketFives release party at my house?