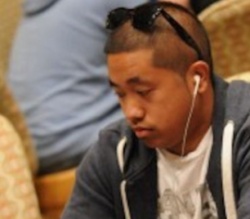 PocketFives: Congrats on your third place in the inaugural Borgata P5s Open for $19,000. Tell us how you felt about the event?

Justin Wong: Thanks! I thought it was a very well run event held at a great venue. The turnout was really good, and the $150,000 guarantee was surpassed by $30,000+. There were also a number of solid players in the field, and I feel very fortunate to have made it that deep. It was also nice to put some faces to the names of players I play against on the virtual felt on a regular basis. I hope we can do it again in the near future.

PocketFives: Do any hands stick out from the tournament?

Justin Wong: Two hands in particular stand out to me. The first of which occurred once we were already in the money. I open jammed 14bb’s with A8 with from the hijack, and ran into the big blind’s AJ. I remember getting a very bad flop that removed one of my outs, thus leaving me with two outs. Fortunately, I was able to spike a clean 8 on the turn, and faded the river.

The second hand occurred while we were five handed at the final table. I got TT all in pre flop against 99, and my opponent had me covered. The flop came AA9. Then I received another miracle turn card, an A.

PocketFives: Do you have any plans with the money won?

Justin Wong: No, not at the moment. I’m not too much of a spender. I’ll probably just add it to my poker bankroll and invest it towards more live tournaments in the future. Although, I was considering paying off my car, but we’ll see lol.

PocketFives: Do you approach an online tournament any differently than a live tournament?

Justin Wong: No, I approach them both the same way. Only difference is that online I have my HUD and hand history to tell me everything I need to know. While playing live, I need to make sure I play close attention and don’t miss any crucial information.

Justin Wong: WSOP and PartyPoker/Borgata Poker, but as others have said, each have their pros and cons. WSOP’s software is great, however they need to improve their blind structures and tournament schedule.

While Borgata/Party Poker has a better blind structure, they need to improve both their software and payout structures. I also used to really enjoy playing on Ultimate Poker back when they had all those huge overlays. I think everyone misses those days lol. I don’t want to leave out 888, because I like to play a few tournaments on there as well.

Justin Wong: Just like everyone else from my generation I’m a product of the Moneymaker effect. I first learned how to play back in the summer of 2004. Started off with friendly $5 & $10 sit-n-go’s, then MTT’s, and eventually drifted off into cash games. However, I didn’t start taking the game seriously until 2012.

The competitive aspect of the game appealed to me. Growing up I was an avid golfer, and played on my high school golf team. Although it may not seem like it on the surface, the two have similarities. Both require a lot of discipline and patience, amongst other things. Just as in golf tournaments, poker tournaments are a marathon and not a sprint.