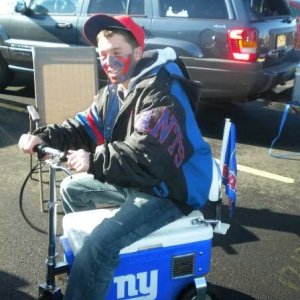 Mike Lavenburg (Lav519on PocketFives, pictured) is better known as myGAMEin the New Jersey online poker community. The Montville resident fell in love with poker after seeing it air on ESPN during the Moneymaker boom. With over $70,000 in tracked online cashes, some of his accomplishments include four wins in the WSOP.com $10,000 Guarantee, one being a WSOPOC event, for a combined $12,832.

PocketFives: When did you start playing poker?

Mike Lavenburg: I started playing poker right after the Moneymaker boom. I remember watching it on ESPN and falling in love with the No Limit aspect. Then, I would going camping as a kid and teach all my mom’s friends this cool new game called No Limit Hold’em. Back then, we used to all play dealer’s choice games for small change. Before that, I remember playing gin rummy and five card draw with my grandmother for pennies.

PocketFives: How many hours do you dedicate to poker a week?

Mike Lavenburg: I generally play Monday through Thursday and Sundays. I try to play all of the $5Ks and higher along with some cash games in between. Although I took some time off in August, I’m back in grind mode this September.

Mike Lavenburg: WSOP.com and PartyPoker. I love the rebuys and payout structure on WSOP, but I like the blind structure on PartyPoker because it plays deeper later.

Mike Lavenburg: My most memorable win would be the $10,000 Guarantee in the last WSOPOC series. It feels good to actually ship one of the events in an online series and I think it’s been my biggest score since I started playing in New Jersey.

PocketFives: To what do you attribute your success playing online poker in New Jersey?

Mike Lavenburg: I believe my success is attributed to hard work and dedication, which come from my love for the game. It incorporates math, psychology, and puzzles, all of which I love. My family and friends have been a huge support as well, so I’d like to thank them. A big shout out to Jake Perry (jtsnakes on PocketFives), who got me back into the game after taking a hiatus due to Black Friday. He’s always pushing me to ship everything I play and put consistent volume in. Jake’s like my personal Jared Tendler.