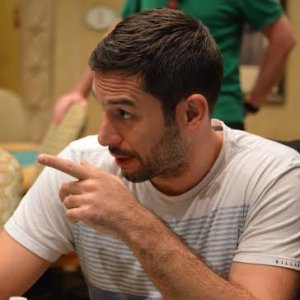 PocketFives had the chance to catch up with Englewood resident Ted ol mugginsEly (pictured, ranked 14th in New Jersey), who started playing poker in 2003 while attending school in Wisconsin. Ely plays under the handles olmugginson WSOP and Roystainon 888and PartyPoker after the fictional character in the movie “Better Off Dead.”

With over $275,000 in tracked online cashes, some of his notable accomplishments include a win in the WSOP Weekend Warm-Up, third in the WSOP Winter Poker Classic Main Event, and a win in the PartyPoker $5,000 Guarantee for a total of $7,937. Visit PocketFives’ New Jersey poker community for the latest news and discussion from New Jersey players.

PocketFives: When did you start playing poker and why was it appealing?

Ted Ely: I grew up in Bridgewater, New Jersey. After graduating from Syracuse University in 2000, I lived in Boston for a year or so and then moved out to Madison, Wisconsin with my girlfriend at that time, who was going to grad school at UW. In Madison, I was working in sales for a software company.

In 2003, my older brother started playing a bit of poker with his friends and he told me about online poker. My first poker experience was playing $5-$20 SNGs on Paradise Poker. I also started playing some small home tournaments in Madison. Like everyone else that got into poker around the same time, watching Chris Moneymaker win the WSOP got me really excited about the game.

Ho Chunk Casino, an Indian casino in the Wisconsin Dells, opened a 10-table poker room around that time. I started playing $5-$10 Limit Hold’em there. Ho Chunk held their first tournament, which was somewhat like a shootout. Every Sunday for five weeks, they had a $200 buy-in, 100-man tournament that would play down to 20 players and those 20 would advance to the final. So, it was basically a 500-person tournament with a $100K prize pool. So, the 100 players that got through came back the sixth week and played a freeze-out.

I ended up taking fifth place for $7,000. I was hooked. At that point, I thought I had a license to print money and would spend the rest of my days relaxing in my solid gold house on Easy Street. Things didn’t exactly play out that way.

In 2005, I moved to NYC to start my MBA program at Fordham. I got my MBA in 2006, but really never did a damn thing with it. While in school, I started grinding $5-$5 and $5-$10 No Limit in the NYC club games and also played $5-$10 NL on Bodog. Obviously, poker was a lot different then. $5-$10 No Limit was pretty easy to beat for anyone who could tell their asshole from their elbow.

I was partying non-stop in those days and basically played poker when I would take the occasional break from partying to replenish the party funds. I was way under-rolled for the games I played and went broke from time to time, but in those days, it was easy to run up a workable roll quickly.

Around 2007 or 2008, I started focusing on MTTs more, both online and live. I started winning some of the small to midsize buy-in tournaments on Full Tilt and made the occasional final table on PokerStars. I never hit a huge score online or won any of the majors, but I certainly sharpened my game.

I started traveling the live circuit after some live pro friends started backing me in 2008. I had a marginally successful run playing live MTTs from 2008 to 2009, making a bunch of final tables, with a win and few second and third places mixed in. But, mostly I fell short of the big, life-changing scores.

Strangely enough, my success in live tournaments also coincided with a long dry spell on the virtual felt. I was in a spot that I’m sure lots of other players can relate to: backed but functionally broke. Any time I hit a little score, most of the money would go to makeup, and what money I did pocket was used to pay bills, etc.

I was also completely out of control with my drinking at that point. Living in casinos on the live tournament circuit was a formula for disaster for me at that time. If you’re a raging alcoholic, I don’t recommend living in a bar that’s open 24/7. I pride myself on being a funny and personable guy, but good god was I a bad drunk. If PocketFives had rankings for worst drunks in poker, I might have been ranked #1 in the world in 2009.

I definitely developed a dichotomous reputation during these years. I was respected as a tough and solid poker player, but seen as a tragic train wreck off the felt. The good news is after getting within spitting distance of rock bottom, I made the decision to change my life in January of 2010. I did a short stint in a rehab center in New Jersey and I haven’t had a drink since. I celebrated five years of sobriety this year.

It wasn’t like it was smooth sailing from that point forward, unfortunately. 2010 through 2012 were some pretty lean years for me. I was functionally broke and grinding live cash for a backer in the NYC games. In 2011, I started to win some small tournaments on Full Tilt and put together a little roll and then Black Friday happened.

I made a few attempts at trying the whole “work” thing out again. I got my real estate license and worked a few different part-time jobs. Nothing really stuck. I was totally disenchanted with poker and wanted to find a real job again. However, I had an eight-year gap on my resume and I was terrible at looking for jobs. So, it ended up being easier just working on my poker game.

I made some adjustments to my live No Limit game in 2013 and started consistently winning again. I’ve been able to put together a serviceable roll after stringing together a couple of good years in a row.

I wouldn’t recommend trying to play poker for a living to anyone. It’s been a bumpy road. I think I would be happier working full-time, or even part-time, and just supplementing my income with poker, but it’s really hard to shift gears when you’ve been doing it for as long as I have. Sometimes I feel like a feral dog in that regard. I may have been housebroken at one point, but if you let me inside today, I’m most likely going to chew up the couch and shit on the kitchen floor.

Ted Ely: These days, I probably dedicate between 35 and 50 hours a week playing poker. I try to play online three or four days a week and then go to NYC, Parx, or Borgata to play live cash one or two days a week with the occasional live tournament mixed in.

Ted Ely: It’s close between WSOP and Party/Borgata. Both sites have great Sunday tournaments. WSOP has the edge on regular nightly tournaments, especially after combining player pools with 888. Party has recently taken some strides to improve recently by adding a few good tournaments to their nightly schedule. The big series are nice on both sites, but are bigger and a little better on Party. They have smartly scheduled their big series to coincide with the big live series at Borgata.

Party has the superior cash action. I am a winning live No Limit cash player, but either the New Jersey NLHE games are tough or I am just an online cash fish. I’ve had a tough time beating the No Limit games at any stakes. The PLO games on Party are much more beatable in my opinion, but I don’t put that many hours in playing online cash these days.

Both sites have room for improvement. WSOP has a couple of glaring defects in the tournament software. For some reason, you can’t rebuy before the first hand is dealt. Also, the software won’t balance tables when it gets down to 10-handed, so one table could be playing six-handed while the other table plays four-handed.

Party’s hand replayer is not great. On WSOP, I can see a hand that was mucked at showdown with one click. It takes a few steps to get to that point on Party. Also, Party’s servers crashing on their biggest tournament day ever last September was unacceptable. Although I was not personally affected by the connectivity issues during the more recent GSSS, I know lots of other players were.

Also, it would be amazing if the sites could offer a more robust daytime schedule. I live with my girlfriend and she works a regular 9-5 job. So, most of the time when we see each other during the week, I’m on the couch in my underoos yelling at my computer. I’m a terrible multitasker, so if we are talking, I’m either not really listening to her or not really giving my full attention to the tournaments I’m in.

Ted Ely: For most of 2014, I was living in Brooklyn and would travel to my parents’ house in Bridgewater to grind a few Sundays a month. My girlfriend and I moved to Englewood at the end of December. The first Sunday as a New Jersey resident, I took third in the WSOP $25,000 Guarantee for $2,300 and a week later I took third in the WSOP Winter Poker Classic Main event. That cash was for $4,662 and is my biggest New Jersey online cash to date. My biggest first place was winning the Weekend Warm-Up on WSOP in February for a little over $2,000.

PocketFives: Is there anyone or anything that helped change how you approach the game?

Ted Ely: I’ve made some amazing friends in my 12 years in the poker world. Trying to play poker for a living can be an emotional nightmare and at times has put a serious strain on my sanity. Surrounding myself with other sickos has made walking through the fire a little bit easier.

All of these people have been great friends and confidants: Ronnie Bardah, Steve Ryan, Dave Fox, Matt Brady, Dave Zeitlin, Brent Keller, Joe Cutler, Chris Lindh, Sahu Habibi, Zhen Hu, and Mookie Thompson. Jeff Vanchiro was another dear friend from whom I learned a lot about poker and life from. Jeff tragically passed away this past December. Rest in Peace, buddy.

Ted Ely: I’m a huge trivia nerd and one of my lifelong dreams is to be on “Jeopardy.” I’m a big MMA fan, so I watch a lot of that. I’ve been watching a ton of documentaries, mostly true crime stuff. I also started drawing recently. My mother and sister are both artists, but I only just discovered that I have a bit of a knack for it as well. Drawing is pretty relaxing for me after putting in an online session. I am a bit of an insomniac, so it’s a way for me to wind down and decompress before attempting sleep.