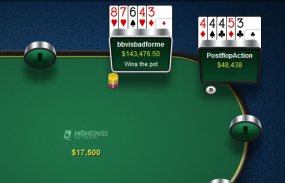 According to HighStakesDB, bbvisbadformehas profited the most in the industry at the high-stakes tables in 2015 at a hair over $1 million. In fact, bbvisbadforme just passed $1 million in profits in 2015 for the first time this year.

HighStakesDB has tracked 7,366 hands for bbvisbadforme in 2015, which means he’s currently sporting in a win rate of $136 per hand. He didn’t start playing this year until February, when he dipped to almost $300,000 in the red before mounting a comeback. By the end of March, he was up almost $700,000 at the high-stakes tables and remained relatively constant until a flurry in the last few days brought him to over $1 million in high-stakes profits this year and $1.3 million since February.

Lifetime, bbvisbadforme is up $734,000. He is down $195,000 at No Limit Hold’em, but has more than made up for it with nearly a million dollars in profits at Draw Games. All told, the tracking site has logged 67,466 hands for bbvisbadforme, translating to a profit of $10 per hand on average.

bbvisbadforme was first tracked in 2011. He has almost twice as much in profits as the next closest person on the leaderboard for the year, although it’s only April. Here’s a look at the top 10: