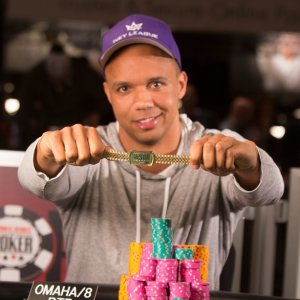 According to HighStakesDB, Phil Ivey (pictured) is the biggest loser at the high-stakes tables so far in 2015, and it’s not even close. In 74 sessions and 12,642 hands, Ivey, who plays under the user name Polarizing on Full Tilt, is down $1.5 million, three-and-a-half times the next closest person.

To put the number in perspective, Ivey has dropped an average of $20,000 per session and $120 per hand tracked by HighStakesDB thus far this year, although he still has plenty of time to climb out of the red.

All-time, Ivey is down almost $6.6 million on Full Tilt since HighStakesDB began tracking his Polarizing screen name at the end of 2012. Over that span, Ivey has played nearly 200,000 hands and has an average loss of $33 per hand. His most-played game is Draw.

Here are the 10 biggest losers of 2015, according to HighStakesDB:

As you can see, there are plenty of other big-name pros on this list besides Ivey, including Phil “OMGClayAiken” Galfond, who is in second place, and Viktor “Isildur1” Blom, who is in third.

Ivey has 10 World Series of Poker bracelets, tied for the second most all-time with Doyle Brunson and Johnny Chan, and is fourth on tournament poker’s all-time money list, according to the Hendon Mob, at $22.4 million.

Last Sunday, Ivey banked $186,000 at Full Tilt’s 2-7 Triple Draw tables, so he has certainly showed signs of life. Stay tuned to PocketFives to see if he can right the ship in 2015.