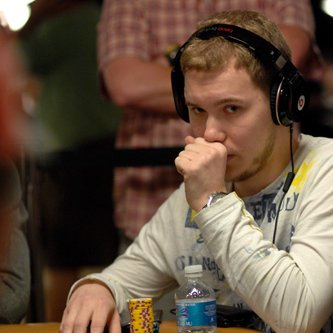 It has been a good year to be poker pro Alexander “joiso” Kostritsyn (pictured). Despite 2015 being just three weeks old, Kostritsyn is up almost $1 million already at the high-stakes tables, according to HighStakesDB. In fact, he piled up almost $200,000 in profit on Wednesday alone and is the month’s biggest winner thus far.

We’ll focus on Wednesday’s session for Kostritsyn right now. According to HighStakesDB, a chunk of his damage came early in the day: “Most of joiso’s winnings came from playing $1k/$2k 2-7 Triple Draw heads-up against EireAbufor a little over an hour. The pair switched tables after an hour, with joiso already up $143.6k. They played on for another ten minutes at a new table, with joiso adding a further $26.5k for a $170.1k win.”

On the live scene, the Russian may be best known for winning the 2008 Aussie Millions Poker Championship for $1.4 million. He won a PokerStars Caribbean Adventure side event in 2014 for $263,000 and has $2.9 million in career live winnings, according to the Hendon Mob, which is good for #8 all-time in Russia. He was #25 worldwide on the 2008 money list.