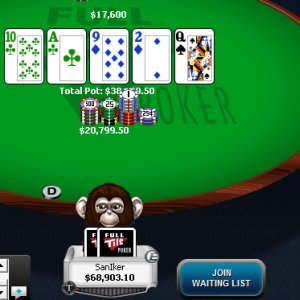 The last seven days have been pretty lucrative for SanIker, according to HighStakesDB. He reeled in almost $400,000 at the $2,000/$4,000 Triple Draw tables on Full Tilt on Monday to push his seven-day winnings to $1 million.

According to HighStakesDB, SanIker first made waves on Monday at Triple Draw against a gauntlet of talent that included Phil “Polarizing” Ivey, Cort “thecortster” Kibler-Melby, Kagome Kagome, and Trueteller. He ended up just over $50,000 when all was said and done despite the stiff competition.

Then, as the tracking site explained, “The next session SanIker took part in was even longer. He played for 12 hours and 20 minutes at table Cable from just past 2:00pm to 2:27am this morning, making a handsome $346.7k profit.” All told, SanIker banked about $400,000 on Tuesday alone to continue his hot streak.

SanIker calls Germany home and HighStakesDB began tracking him on the last day of April three years ago. Since then, he is up almost a half-million dollars. Here are his results in each game HighStakesDB has tracked for him:

According to HighStakesDB, “He started his poker career playing on Euro sites, where he has done extremely well, before transitioning to the high-stakes games. He is currently studying Economics at university and playing poker part-time along with that.” His biggest pot played came in October 2013 at a $400/$800 No Limit Hold’em table and was worth $264,000.

On PocketFives, Germany is #13 on PocketFives’ Country Poker Rankingswith a combined PLB score of its top 20 ranked members of 79,539 points. Its biggest tracked tournament score was $341,000, which came in a $2,620 event on Full Tilt in August 2008 by PocketFiver triathlon4. There are almost 2,000 PocketFivers who call Germany home and, combined, they’ve amassed $162 million in career tournament winnings.