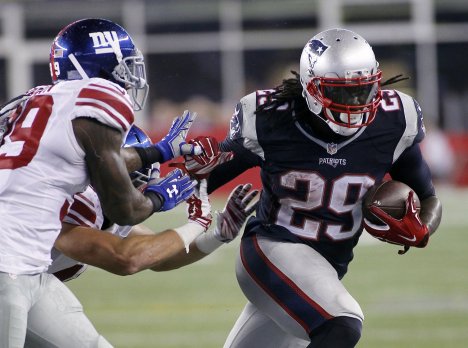 Are you ready for some daily fantasy football?!?!?

Yeah me neither. I’ve always been a fan of football, but I’ve never been one who knows much about the players or how to predict what they’re going to do, so I always feel a little bit overwhelmed with what to do before a NFL season. 2014 was my first year playing daily fantasy football, and I planned on just getting in for a few bucks to have something to root for on Sunday without calling a bookie. By the time lineups locked I had $6k out in action, felt good about my picks, and then vomited on my shoes because I remembered that I knew nothing about daily fantasy football a week ago. Let me walk you through that week so you can feel good about your picks this Sunday.

How to DFS Part One

I’m assuming you know the basics like what is a cash game and what is a GPP, if not then make sure you read How to DFS Part One.

In daily fantasy football everything starts for me with Vegas’ information. I think that PinnacleSports.com has the most accurate lines, and their business is making good betting lines so people will bet on both sides. Bookies are very good at their job, and they have essentially done all the work of making projections for us. Green Bay -6.5 at Chicago and a game total of 50 points lets us know that Green Bay is a favorite to win by 6.5 points and Vegas expects 50 total points to be scored in the game. That means that the final score should be 28.25 Green Bay, 21.75 Chicago.

An easier way to look at this information is the Team Totals bets. In daily fantasy sports we don’t care about who wins the game, we care about who scores the most points, and real life points scored in football games directly correlates to fantasy points scored in fantasy contests. If Green Bay was supposed to win that game 28-27 then both teams deserve a lot of looking at, especially since the game might turn into a shootout.

That’s what the game line (Green Bay -6.5) is good for, helping us predict a bit of game flow. If a team is a big favorite, then a blowout is more likely. If there is a blowout, then the running back might get the ball more in the winning team’s effort to bring things to a close without risking a turnover. If there is a blowout, then the quarterback might not play late in the game, lowering his ceiling, or the amount of fantasy points that the guy can score. So maybe Aaron Rodgers isn’t so good of a play but Eddie Lacy is?

Oh, you don’t know who does what for each position? No worries, check out the depth charts. Starting lineups are typically released Sunday morning, final injury reports and depth charts are released Thursday. The guy on top of the depth chart usually starts, so if you look at the line and want the runner from Green Bay, the depth chart tells you who their ball runners are and coach’s order of preference.

Vegas comes in handy here again. Vegas offers bets on players’ performances, and they do their best to set lines which are the player’s average performance… conveniently easy to create fantasy point projections from. Unfortunately player props don’t come out until later in the week when maximum information is available to Vegas, but if you’re wondering Sunday morning between Aaron Rodgers and Andrew Luck, and Vegas has Rodgers at 300 yards and 3 TDs but Luck at 275 and 2.5, then Rodgers is the better play.

We are always looking for mispriced players. These situations most commonly arise when a player higher in the depth chart gets hurt after prices are released for a slate. Jordy Nelson going down in the first preseason game is the most obvious example of the 2015 week one slate. Jordy was priced at 8.4k and for good reason – Green Bay is supposed to score 28 points and Chicago had the worst defense against the pass last year. The 3rd string guy, Davante Adams, was quietly, and fairly, priced at 4.4k. Rodgers is still throwing him the ball, but likely less than half the time. Then Jordy got hurt. Now Randall Cobb is the new Jordy, Davante is the new Cobb, and then Cobb tweaked his shoulder. That leaves a whole lot of passes from Aaron Rodgers against the worst defense against the pass to be caught by somebody – and Davante Adams is in front of the line. Guys like this are excellent cash game plays and crux decisions in GPPs because of how popular they are likely to be. Even the season long guys know about Davante Adams.

We need to know how fantasy points are scored on the site we are playing on. DraftKings awards a full point per reception while FanDuel only awards a half a point. This makes a guy like Adrian Peterson more valuable on FanDuel while I’d rather have a pass catcher like Le’Veon Bell on DraftKings.

Take guys on teams who are going to score a bunch of points. If Green Bay scores 28 points, then somebody has to score those points. We can use the Vegas line to predict game flow; if it will be a blowout, the running back might get more work. If it will be a close game, then lots of offensive plays will be run, boosting everybody on the field. Next we can look at defensive statistics to try and get an idea how Green Bay will score those 28 points. Last year the Bears were the worst in the league against the pass, and 23rd worst against the run. Give a boost to Aaron Rodgers.

Now we must consider what format we are playing. If playing against one person, or playing in a 50/50 contest where the top half double their money, then our priority should be consistency. Quarterbacks and running backs are the most predictive positions in football because they touch the ball the most, and the more times a guy touches a ball per game the closer to his average performance he will yield on a daily basis. Typically for a cash game (head to head and 50/50 contest) I will spend most of my salary cap on quality arms and legs. I look for cheap options at the wide receiver and tight end position, because they only get so many balls thrown their way per game, and it is much harder to predict how many they will catch and if they will find the end zone. Thus I would rather have Aaron Rodgers or Eddie Lacy for cash games but Randall Cobb, Davante Adams, their tight end Rodgers, or whoever is the #3 WR for GPPs.

When playing against a bunch of people, you need to do something special to beat them all. The big contest on DraftKings this weekend boasts a $10,000,000 prize pool with a $20 entry fee. The contest can accommodate over 572,000 lineups. In GPPs, the goal is to separate from the field and score a lot of fantasy points. All the money is up top and we really want to have a chance to take first by ourselves. This means we want to avoid the consistent and popular plays and seek players that can really score a whole bunch of points, like wide receivers or tight ends that can catch a couple of touchdowns, and then maybe pair them up with the quarterback throwing them the passes, so both guys score points on the touchdown.

This is called a combo in fantasy football, having a quarterback and guys who catch his passes on the same fantasy lineup. I’ve seen and tinkered with combos of a quarterback and up to 3 pass catchers representing any of the positions, although having a RB and QB from the same team won’t have as much upside as from different teams, because when the quarterback hands the ball to the running back and he runs it in, the QB doesn’t score any more points this drive because the ball is taken out of his hands and given to the other offense. This is bad because football games have a time limit.

The other combo I like to work with is defense/special teams and running backs. When football teams get ahead, they often give the ball to the running back more than usual. A good defense makes a team more likely to be ahead. Good defenses score more fantasy points.

Don’t try and predict defensive touchdowns, you can’t. We have discovered that we can predict which defensive units are most likely to score the most fantasy points based on these conditions: They must be the home team and have an outdoor stadium (home noise and weather both help defenses). They must be a favorite in the game by at least 3.5 points. The game total must be under 45. I usually only take D/ST units that satisfy these four conditions. If that running back also happens to return kicks for the D/ST unit, and if he happens to run one back, then both he and the D/ST unit score a touchdown. Lots of points. There are more WR/DST combos than RB/DST combos, but RBs more directly benefit from good D/ST performances.

So now you should have a few slots left in your lineup. Fill in the blanks with consistent players for cash games, and seek guys who can score a lot of points for GPP lineups. The last thing to consider is the popularity of a player. If you have a guy that scores three touchdowns but so does 50% of your competition, then all you have done is keep up with the pack. If only 1% of the field has your triple touchdown guy, and the other guy that 50% of the field has rolls an ankle on the first play, then you are set up for a big day and have really separated from the competition. Your biggest decisions will often revolve around whether to play or fade a popular player, because if you fade the popular guy and then he goes off, you lose. If you are on a popular player and he goes off, then you still need to do something special with the rest of your lineup to separate from the secondary herd.

Keep your buy-ins low while you learn. Check out the beginner contests on DraftKings, they are easier than any other contests and only available to people who have won money in less than 50 contests for the sport. Have fun out there, I have really enjoyed playing DFS and I hope you do too!