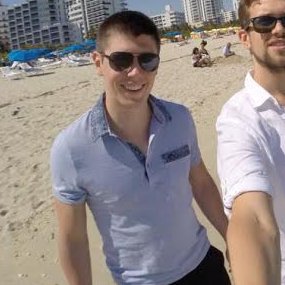 It has been a groundbreaking year for Polish PocketFiver bartek901(pictured), who earned his $1 million cash badge, final tabled the WCOOP Super Tuesday for $150,000, and took second in the PokerStarsSunday $109 Rebuy for $64,000, just to name a few scores. He’s the top-ranked Poland poker community member on PocketFives.

“I’m feeling pretty good,” he told us. “The $1 million badge is a badge I wanted to get and I am glad I finally have it.” On why one of his goals was reaching $1 million in online tournament winnings in the first place, bartek901 explained, “For the same reason I want to get to $2 million now: just achieving the next level.”

In 2012, bartek901 hit a $41,000 score in the Big $109, a career-changing cash. He recalled, “I was having a pretty good run around that time, so it felt somewhat normal to have many deep runs. Of course, I felt enthusiastic about it, but I can’t remember going too crazy with celebrations.” He has $1.2 million in online MTT scores on PokerStars alone.

bartek901 got started in poker during high school. He relayed, “I had friends in my hometown who were doing really well from poker when no one was really a baller, so I talked with them and decided to give it a shot. I was really passionate about the game at that time. My family was disappointed that I quit studying to play a card game, but now it’s alright.” 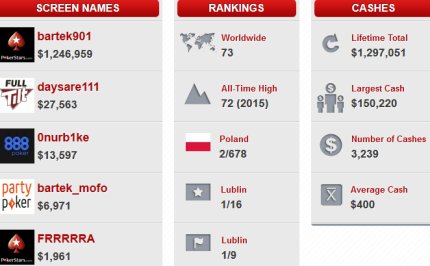 The Polish player was studying Economics at the University of Warsaw and planned to work for a corporation or a bank. He joked, “I cringe talking about that now.” His decision seems to have been a good one, as bartek901 is up to #73 worldwide in the PocketFives Rankings, right around his highest spot to date, and is averaging an even $400 per in the money finish.

Outside of poker, bartek901 enjoys going to parties with friends, watching television, and hitting up the gym.

There are 1,089 registered PocketFivers from Poland who have accounted for almost $100 million in combined online tournament winnings. A total of 678 Polish players have PLB scores. Our million-dollar man said that while he is stoked to represent Poland, he is rocking a Mexican flag as his avatar on PokerStars.

“I feel like poker is getting pretty popular in Poland thanks to the success of beasts like Dymitri Urbanovich and Dominik Panka,” he said. “They really put poker in the spotlight in Poland.”

See who else has earned their $1 million cash badge.